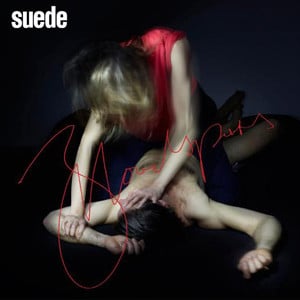 You have to feel sorry for Suede. The excitement inspired by their explosion onto the scene in 1992 which saw them memorably hailed as “The Best New Band in Britain” had, by their implosion in 2003, turned into widespread derision and, worse, indifference.

In subsequent years the former members engaged in a motley variety of activities, from Brett Anderson’s misfiring reunion with former member Bernard Butler in The Tears and low-key solo career to launching obscure bands (Richard Oakes’ Artmagic) and joining existing ones (Simon Gilbert and Bangkok’s Futon). Bassist Mat Osman even composed the theme for Channel 4 panel show 8 out of 10 Cats. Not all of these projects were unworthy of attention but they seemed rather random and haphazard and for a while it looked certain that memories of Suede’s terrific triumphs would fade and the band would slink quietly into obscurity.

It was pleasing, then, when (following the enormous success of Blur’s reunion) the band regrouped in 2010 for a series of gigs and a succession of dazzlingly comprehensive reissues of their albums. This was a chance to rescue Suede’s reputation from the decrepitude into which it had fallen. In a generation who had been adolescents in the mid-90s a wave of potent affection was stirred, enough for the resurgent five-piece to play such enormous venues as London’s O2 Arena. The gigs were taut and impressive – this clearly was a band with something to prove – yet hanging over proceedings was the inescapable feeling that nostalgia was anathema to what Suede, who at their peak had seemed so vital and uncompromising, were about.

January’s surprise release of new song Barriers put that concern to rest. An assuredly widescreen anthem, it sounded like classic Suede without seeming out of place beside contemporary acts like Florence And The Machine and Kings Of Leon (with added lashings of U2 for good measure). It suggested a band reinvigorated and briefly inspired an anticipation which recalled their early years: briefly because, the very next day (no pun intended) David Bowie made his unheralded and hugely shocking return, stealing the band’s thunder completely. It almost seemed like cosmic revenge for when Bowie’s Black Tie White Noise was released soon after Suede’s debut and met with largely unfavourable comparisons. Suddenly the band had that whiff of irrelevance around them once more.

Bloodsports, then, doesn’t arrive with quite the hullabaloo which the band probably hoped for but it’s a welcome release nonetheless considering they could undoubtedly have made plenty of money coasting on the old hits. As Brett Anderson has astutely noted, it’s very difficult for reformed acts to put out new material as the risk of interfering with fans’ memories is so great. If Barriers suggested a compelling update of Suede’s sound, however, it proves misleading: it quickly becomes clear that with Bloodsports they have tackled this problem of expectation by slavishly following the blueprint of  1996’s Coming Up (their most successful album). Bloodsports’ artwork clearly nods towards it while both albums have the same number of tracks. Most strikingly, the experimentation which marked much of Suede’s (previously) final years, from the electronica of Head Music to the ‘experimental folk’ of A New Morning, has been completely ditched: these are 10 no-nonsense glam-pop songs which swoop in, do the business and then depart before you have any chance to be bored.

Certainly as a Suede album it pushes all the right buttons: Snowblind and Hit Me, both rollicking numbers which blow away the cobwebs left by the lacklustre A New Morning, sound tailor-made for indie club dance floors while lead single It Starts and Ends With You is an endearingly catchy melodrama. The Suede ballad (almost a genre to itself) is more than adequately represented with the tear-stained and atmospheric What Are You Not Telling Me and Sometimes I Feel I’ll Float Away both recalling the ambiance of Coming Up’s Picnic by the Motorway. The band have never sounded so tightly cohesive and there’s a real sense that they’re working at a level where they could toss these songs off in their sleep.

Therein lies the problem, unfortunately. While nothing here is bad there is also little that feels truly inspired; instead we find a band offering efficient re-treads of what they have previously done much better. While Anderson’s lyrical palette has undeniably broadened in the past decade you never feel that you are being offered any insight, any reflection that these are men who have grown in the time they’ve been away.

As a result much of it feels like pastiche, albeit of an often very entertaining sort. Moments such as the brooding Sabotage and the layered escalation of Faultlines cause you to wonder what might have been had the band been more ambitious. As it is, this album seems unlikey to disappoint many people who were fans of Suede first time round – and it’s definitely a better close to their career than A New Morning – but it’s difficult to see what it has to offer new listeners in 2013.