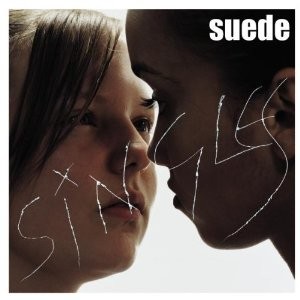 It was, would you believe, 11 years ago that Suede first appeared on the cover of the now defunct Melody Maker under the headline, “The Best New Band In Britain”. Before they’d even released a single, that is. Brett Anderson’s ambiguous image and way with a quote (“I’m a bisexual man who’s never had a homosexual experience”) meant that Suede were always guaranteed publicity.

Perhaps understandably, Suede got up some people’s noses in their heyday. Anderson’s arse-slapping dance routine and Bowie-esque vocal stylings made him a figure of fun for certain sections of the music press. What’s easily forgotten though was just how damn exciting their music could be at its best. At a time when shoegazing was the major musical movement, Suede brought glamour and decadence back into the charts.

This 21 track collection of singles gives us a chance to re-acquaint ourselves with Brett and company and explore just why they created such a buzz. As the title suggests, only singles are included here, which means no room for the sometimes more interesting B-sides and album tracks that the band specialise in.

The album isn’t in any sort of chronological order, which is surprising as Suede’s career can basically be divided into two halves – before Bernard Butler and after Bernard Butler. The temperamental guitarist walked out on the band during the recording of their second album, and was replaced by 17 year old Richard Oakes. It’s a tribute to Oakes’ ability that singles such as Animal Nitrate and Trash can sit so easily beside each other.

Listening to this, it’s hard to see why Suede aren’t as celebrated as their contemporaries Blur, Pulp and Oasis. Opening track Beautiful Ones fizzles with energy and early single Metal Mickey still sounds as impossibly fresh as it did in 1992. There’s also room for the band’s gentler side, such as the gorgeous The Wild Ones – Anderson’s voice has never sounded better on this highlight of Suede’s best album Dog Man Star.

There’s also the glorious Stay Together (now oddly disowned by the band) which proved to be Butler’s swansong. When he left he took some of the creative tension that the band thrived on, and although Oakes was, and still is, a great guitarist, he was no match for his predecessor as a songwriter.

This didn’t seem to matter at first, as singles such as Trash and the aforementioned Beautiful Ones were as good as anything in their back catalogue. However, She’s In Fashion and Can’t Get Enough were very much Suede-by-numbers, and all but die-hard fans appeared to lost interest by the time of the release of Positivity – a shame, as it was the beginning of a return to form.

Singles is an excellent summation of Suede’s career so far – they may never hit the glorious highs of their early days again but judging by the two new tracks here – Attitude and Love The Way You Love – there’s plenty of life in them yet.