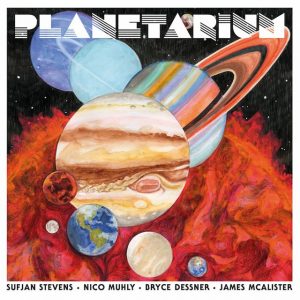 Is there any musician performing today as unpredictable and restlessly inventive as Sufjan Stevens? Since his debut record A Sun Came back in 2000, the range of projects he has been involved in has been simply staggering – everything from concept albums about American states (although sadly, it looks like we’ll never get the full 50 he promised) to collections of Christmas songs and a multi-media tribute to the Brooklyn-Queens Expressway. Along the way, his breadth of musical styles has been equally diverse, encompassing simple acoustic guitar songs, sprawling electronica, chamber folk and full blown orchestral works. It’s anyone’s guess what this unique figure will turn his hand to next.

With this in mind, it probably shouldn’t be a surprise that Stevens’ latest undertaking is a 75-minute-long song cycle that “explores the Sun, the Moon, the planets and other celestial bodies of our solar system.” However, while the Michigan master plays a key part in proceedings, this is by no means a Stevens-dominated record. Instead, it’s very much an equal collaboration between four differing talents – with prolific composer Nico Muhly, The National guitarist Bryce Dessner and percussionist/producer James McAlister completing the quartet.

Indeed, while Stevens provides the central voice and lyrics to Planetarium, it is arguably Muhly, whose stock has risen high through his work with everyone from Antony And The Johnsons to the English National Opera, that’s the key influence on the structure and sound.  The idea was born when the Dutch concert hall Muziekgebouw Eindhoven commissioned Muhly to create a new piece for their audience, and his wide experience composing music for cathedral choirs and symphony orchestras provides many of the record’s strongest sections, with a string quartet and seven trombonists providing the right level of ballast.

Planetarium’s tracks are all named after the solar system’s planets or other celestial bodies, such as Halley Comet and the Kuiper Belt. It starts off promisingly with the soaring, suitably ethereal and otherworldly dynamics of Neptune, which fuses a quintessential Stevens melody and fragile vocal to Muhly’s swirls of strings and brass. Lyrically, Stevens also sets out the record’s concurrent theme of human consciousness and how we engage with the world around us, singing portentously “what’s right and what’s wrong/don’t you hold me too lightly to words.” But then the sonic template shifts palpably, with McAlister’s beats taking centre stage, performing a similar anchoring role to the one he provided on Stevens’ Age of Adz album. It’s not a great success, as the industrial rhythms are allowed to rather swamp Stevens, and even a dramatic flourish of brass at the end doesn’t really compensate.

This dichotomy characterises Planetarium throughout its long duration. There are numerous disparate elements at play, reflecting the different backgrounds of the contributors, and while sometimes it all comes together beautifully, at others it feels either strangely flat or rather a chaotic, over-egged mess, with the clash of influences jarring rather than blooming. For example, Pluto is sensational – a mournful Stevens backed by some wonderful liquid guitar work from Dessner and a stunning, oriental-tinged orchestral section. The 15-minute closer Earth is a composition of impressive heft, complexity and ambition.  Yet for every highlight, we also get dull, shapeless fare like Black Energy and Sun, the kind of ambient space noise the likes of Blanck Mass frankly do much better. Planetarium is a boldly ambitious statement from a lavishly talented group of individuals, but ultimately it doesn’t quite scale the lofty, intergalactic heights it aspires to.