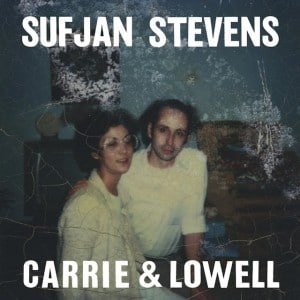 Sufjan Stevens has sometimes sounded so overwhelmed by the world that he has tried to capture all its wonder in each individual song he writes. From the opulence of Illinois to the obfuscating clutter of The Age Of Adz, his approach to arrangement has often been that more is more. Stevens is a talented arranger, but his best work has tended to be his most direct and spare. John Wayne Gacy Jr is a vital, important song, a shocking and powerful response to evil set to the starkest of musical backdrops (it seeks to both understand and condemn at the same time), whilst the creaking appalachian folk of Seven Swans provided a striking context for examining faith.

Carrie & Lowell (named after Stevens’ mother and step-father) has been described as a return to the acoustic settings of Seven Swans but, perhaps fortunately, the story is not quite that simple. This album is anything but a regression for Stevens and it may yet come to represent an important step in his artistic evolution. It’s certainly his least percussive work for some time, perhaps even his least rhythmic – with chord changes that are mostly one or two to a bar and on the beat. Acoustic instruments (guitars, banjos, ukuleles) are once again foregrounded, but Stevens has not entirely abandoned the electronics and synthesizers that dominated The Age Of Adz. This time they are more carefully integrated into his exceptionally powerful songs, leaving considerable space (so much so that his vulnerable voice often seems dangerously exposed). The lush, evocative coda to I Should Have Known Better and the fragile pitter-patter of the title track might represent Stevens’ most effective use of electronics to date. He is wise enough here to let his songs tell their own story, rather than seeking to dazzle with tricks and frills.

Stevens has retreated from maximalism to the extent that parts of Carrie & Lowell were recorded on an iPhone app in hotel rooms (many tracks are bathed in background noise), but this process seems to have enhanced the intimacy and fragility of these confessionals. Stevens’ beautiful melodies here often have a near-childlike simplicity. Nothing is more elaborate than it absolutely needs to be. The clarity of the arrangements achieves a compelling unity with the frankness, honesty and directness of the subject matter.

Written and recorded in the wake of his mother’s death, Carrie & Lowell explores grief, but also the issue of mortality much more generally, and how its inescapable fact affects our lives and relationships. It is in this way that Stevens’ very personal, introspective poetry here achieves a universality and power that was lacking on The Age Of Adz. Here, Stevens can juxtapose the candid and the banal (“you checked your texts while I masturbated” on All Of Me Wants All Of You) whilst revealing subtle details of human fallibility.

Carrie & Lowell is not simply concerned with our experience of the death of those close to us – but also with the idea that we can be stymied by a kind of living death, when either indecisive or limited by depression. On All Of Me Wants All Of You, Stevens is “a living ghost you walk right through”, whilst on the beautiful John My Beloved, he states “there’s only a shadow of me, in a manner of speaking I’m dead”). Much of the music feels haunted in its melancholy and in the atmospheres Stevens effortlessly conjures (not least on the absorbing, richly textural Fourth Of July).

It is haunted by memory as much as by ghosts. Stevens persistently associates childhood memories with more contemporary trauma. On Eugene, he sings of ‘the man who taught me to swim, he couldn’t quite say my first name’ before realising “And now I want to be near you”. There is always a hint of ambiguity in these songs (a trait common to most of Stevens’ most personal music) – is he singing about his departed mother, a lover or a friend? If there one ‘you’ or multiple ‘yous’ here? I Should Have Known Better incorporates a recollection of his mother (who left the family early in Stevens’ life) briefly abandoning him in a video store at the age of three (or “maybe four”).

Sometimes the vivid, poetic imagery risks obscuring or masking a song’s meaning (such as the title track, where Stevens refers to Dido’s lament, ‘Erebus on my back’ and ‘Thorazine’s friend’) but mostly he achieves a powerful clarity and resonance here. Perhaps most striking is The Only Thing (also populated with mythical references), during which he appears to be treading a perilously thin line between life and death (“Should I tear my eyes out now before I see too much?/ Should I tear my arms out now – I want to feel your touch”). He is kept alive by faith, signs and wonders.

Carrie And Lowell is an introspective, deeply thoughtful album but it deftly avoids self-indulgence. It feels like a healing process, not just for its creator, but for its audience too. There is also a sense of Stevens speaking directly to each listener as an individual. It captures a sense of grief and loss, both for the dead and for the mistakes we all make in life. Sometimes it feels like the hourglass is slowly running dry – and Stevens knows this only too well. He has bravely laid his songwriting gifts bare in their purest form.