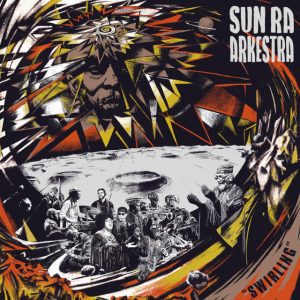 There’s a recurring quote, attributed to bandleader Sun Ra, brought out time and again over the many years of interviews he conducted, that summed up his optimistic attitude towards the art of music making, and it states, “The possible has been tried and failed. Now it’s time to try the Impossible.” With Swirling, the first ‘new’ album by the Sun Ra Arkestra in 20 years, they’ve gone beyond the impossible and delivered something truly incredible.

Opening with a reprise of 1971’s The Satellites Are Spinning, in which violinist Tara Middleton loudly promises “a better day is breaking”, it feels like a resurrection. It loses the baroque piano introduction of the original piece; instead you hear Middleton’s impassioned battle cry followed by some breathy sax as the rest of the Arkestra dust down their instruments and rise from the sonic depths to reclaim their rightful place in the musical landscape.

Spritely 96 years young saxophonist Marshall Allen, who joined the group way back in 1958, assumed control of the Arkestra when Sun Ra (affectionately called Sonny by his closest friends) sadly returned to his mythologized home planet of Saturn almost 30 years ago. Since then Allen has done a magnificent job of maintaining and honouring the legacy started by Sonny, without seeking to assert ownership. This record feels like a chance for Allen to finally get some credit for his professional prowess. Perhaps it stems from the fact that so much of the group’s recorded output has sounded decidedly murky, based on it being a mixture of live recordings taken from festival sound desks and small music halls, but some time in an actual studio under Allen’s masterful direction has made the music seem more vibrant than you’d remember, and certainly more contemporary.

So it is that second track Seductive Fantasy is 11 minutes of rapturous metronomic friskiness. Each section of the Arkestra is given free rein to add personality to the misleadingly unassuming melody. What could have been a dissonant muddle is transformed into a celebration of the possibilities of interpersonal and rhythmic potentiality. On Angels & Demons At Play again a primal rhythm takes shape, one that summons the righteous power of Gil Scott-Heron at his finest. Halfway through the all too brief 13 tracks we get a take on Rocket Number Nine that shatters all past attempts at the song. When it premiered back on 1966’s Interstellar Low Ways album it was a whirlwind of drums and hi hat that slowly progressed in form, until decades later it had became an amphetamine fuelled fever dream of Raymond Scott inspired exotica. Its structure always came from the song’s mantra-like repeated sentence “Rocket Number Nine take off for the planet, to the planet Venus” but it had become clogged with exaggerated sound affects and felt uncomfortably chaotic. Allen and collaborators have slowed down the tempo here and add only the occasional anomalous musical embellishment for humorous punctuation. Whilst the song does still build in intensity, it never feels that at any point it may turn destructive, rather conveying a sense of genuine propulsive energy and urgency.

Elsewhere Astro Black has also been stripped of its tightly clustered instrumentation, becoming a terse ritualistic incantation about cosmic potentiality. It’s still saturated with oscillating electronic trappings but by removing the majority of cumulative features that once burdened these numbers, the Arkestra have revealed what was hidden in plain sight. The act of giving the songs a chance to breathe once more has made their collective voice that much stronger. When Tara Middleton sings again, she strips the lyrics of melismatic technique, so prevalent in contemporary song, offering a plaintive more in tune with such as Nina Simone.

As the album progresses, Unmask The Batman reveals an irreverent facet to the group’s good-natured dynamic. It was always an underrated and playful song in their canon, moving as it does away from the celestial thematic concerns of the rest of their oeuvre. It was Sonny playing with pop culture and performative action, cut from the same cloth as the spooky voodoo blues of Screamin’ Jay Hawkins or late period Miles Davis when he unironically covered Cyndi Lauper and perhaps even Rahsaan Roland Kirk’s driving free jazz cover of The Jackson Five’s soppy Never Can Say Goodbye. This iteration is even replete with the recurring iconic theme from the campy 1960s TV show and feels like further evidence of the Arkestra letting go of expectations, going from elder statesfolk to cartoon villains.

The album ends with a double whammy. On Space Loneliness we get Tyler Mitchell’s bass teetering on the despondent as it plots a skittish course for his band mates to shadow. Inspiring evocations of New Orleans big bands, it swings round to a gospel-tinged cavalcade courtesy of Ms Middleton’s emotive pleas, before descending into a psychedelic fuzz guitar laden coda. It feels like an exhilarating goodbye but is misleading, for there is one more track to go.

And so the album closes, with a take on Door To The Cosmos from 1979’s Sleeping Beauty album. Past incarnations of the track had a tendency to feel somewhat heavy-eyed and non-committal, but as with Rocket Number Nine they’ve added new inflections on the spoken word elements and now it zings with fresh vigour before being interspersed with what appears to be a riff on the harmonics from Pharaoh Sanders’ 1969 spiritual jazz masterpiece Hum Allah Hum Allah Hum Allah.

The album courses to its denouement with renewed enthusiasm and, whilst the band has a long history of responding tonally to the concerns of the day, it never feels agitated or defensive. Imstead it’s a stately and urgent reclamation of intent from all involved. If you expected a band with such a long and storied history to ever be elegiac or pedestrian that would be a grave misstep. Under Marshall Allen’s all seeing eye, they’ve untethered themselves from the oppressive gravity of their past and launched themselves head first off back into the furthest reaches of outer space from whence they first came.