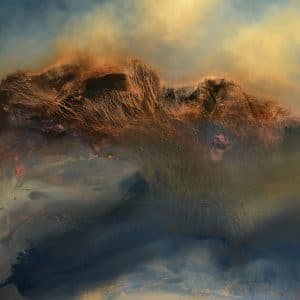 Sunn O)))‘s music seems to move at a similar speed to evolution or the shifting of tectonic plates. Yet a mere six months after they released Life Metal, another slab of thunderous metallic drone has appeared like a monolith before a tribe of inquisitive neanderthals.

Pyroclasts was recorded and created at the same time as the material that populated Life Metal, so naturally it serves as something of a companion piece to its predecessor. Whilst from the same sessions as Life Metal, these tracks come from a slightly different place. Culled from daily practice sessions, these explorations are the result of improvisations that revolve around a particular modal drone. Essentially an exercise to open the band up for the day ahead, they served a purpose for Sunn O)))’s key players. As a slab of recorded work, they provide a path to a meditative state for anyone that happens to plug in and let the waves envelop them.

The result comes together to create something truly immersive. It’s all too easy to dismiss what Sunn O))) do as simplistic or repetitive; the truth is that their music is all about opening up sonic possibilities and placing the listener directly in the middle of the waves of distorted drone. Whether they sink, swim or surf is entirely up to them.

The recorded experience of the band is entirely different to that of seeing them live of course, but these last two albums are perhaps about as close to the bone shaking, mind expanding, air shifting onslaught as has yet been committed to tape. Somehow, Pyroclasts is more stripped back than Life Metal, but that merely adds to its live and immediate feel. There are subtleties here; hidden in the distorted drones are rogue notes, intriguing passages of feedback and surprisingly beautiful tonal shifts. When Ascension starts with a guitar squeal it almost seems to catch everyone (including Sunn O))) themselves) by surprise. It’s perhaps the only real jarring moment on the album, but the band soon re-centre and set about creating a piece of music that swings from cacophonous lows to squealing highs.

At times, it seems as if the whole purpose of Pyroclasts is to explore the notion of the sound of single notes evolving, changing shape and transcending. While with this release the current chapter of Sunn O))) comes to a close, it’ll be interesting to see what their next evolutionary step is. Naturally, most of us will want to take that step into an unknown future with them.