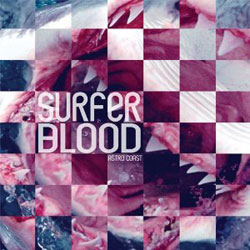 Surfer Blood are JP Pitts, Tyler Schwarz, Thomas Fekete and Brian Black, four men in their early twenties from Palm Beach, Florida. No surfers themselves, despite their band’s name, the music that they produce does nonetheless seem, on some level, informed by the ocean besides which they grew up.

Titles like Floating Vibes, Swim and indeed the album title Astro Coast undoubtedly reference the seaside. More than that though, the music itself has, in large part, an open-hearted, summery vibe that conjures days spent hanging out on the beach in the sun. The musical elephant in the room of course is the (nowadays seemingly near-obligatory) Beach Boys influence. This is heard most strongly on the terrific future single Swim – expansive, wonderstruck, lush and lovely. Echoes of the Wilson brothers et al can also be heard on Slow Jabroni and closing track Catholic Rangers.

But this is a band that has a lot more going for them. Their fiendish way with a tune is demonstrated from the off with the cracking opener Floating Vibes. Its catchy melody, served on a bed of mellow guitars and sweet background harmonies, actually recalls the college-rock 1990s more than the 1960s. Anchorage too is a tale of small town Slackerdom that is more Reality Bites than Surfin’ Safari. Decades meet and merge on Twin Peaks, part British Invasion vocals, part Times New Viking or No Age noise from nowadays. It is also, along with Take It Easy, one of two tracks featuring afrobeat-style guitar: appropriately upbeat and cheery.

Lyrics are often romantic: “I need you in the here and now”, “Dreaming of your warming touch”, or Catholic Dragon’s lovely “When I met you I broke the mould / I fell apart and combed my hair”. Other themes are more downbeat, like Harmonix’s plaintive “We could have been the best of friends / Now I’ll never see this place again”, or Fast Jabroni’s “We can find a hole to crawl into”. But this is music where the words mostly play second fiddle to the sounds in which they are couched – a sound equal parts mellow and dissonant guitars, the occasional bit of psychedelia or afrobeat, a few incidental shimmering synths from time to time. The vocal is good-natured and optimistic sounding too – still more reason to warm to this most likeable of music.

The album is strewn with highlights. The aforementioned Floating Vibes and Swim; Twin Peaks’ tale of relationship woe and TV; Anchorage – all jarring chords, cymbals and early-twenties small town angst. Catholic Pagans too is great, and a lovely way to close an album: sweet but not cloying, honest, tuneful and touching. The band are least enjoyable on the more downbeat numbers. The melancholia of Harmonix seems to sit less successfully with the band’s sound, and Slow Jabroni too is a serious song: “Take some time to figure it out” they implore gravely, in a manner that (just slightly) jars with the rest of the album.

Yet with a timely June release, and a recent presence at events like Barcelona’s Primavera Sound and the Pavement-curated ATP, Surfer Blood have made an archetypal “soundtrack for summer” album. Its youthful sense of noise and joy and wonder are heartening, its way with a tune addictive. Would that all summers were as warm, as happy and as big-hearted as this music.