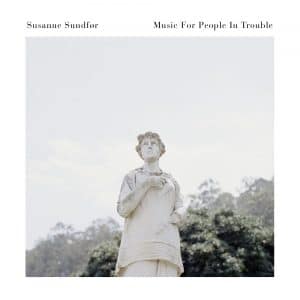 It took Susanne Sundfør a little while to break through, but with her fifth album, Ten Love Songs, she did just that. That album was a shiny electro-pop gem with a darkened heart pumping away at its centre and most recently, she popped up on a few radars when she breezed effortlessly through Scott Walker’s The Amorous Humphrey Plugg at the BBC Proms.   Music For People In Trouble finds Sundfør moving away from the electronic world and embracing a more traditional singer-songwriter approach. She is nothing if not adventurous and diverse, and whilst some artists might find it hard to move between musical forms and genres, there’s no trouble in evidence here at all.

The sense of disruption and unrest comes from the twin themes that inform the majority of these songs. She entwines concerns about the environment and the planet with narratives of relationship breakdown and heartbreak; and throws in a few plane crashes and disasters for good measure. This is an album that deals with pain, damage, wreckage and the painful aftermath, and unsurprisingly, Sundfør fills these songs with a great deal of sadness and emotion.  Musically, Music For People In Trouble is actually rather sparse, and Sundfør often finds herself accompanied only by piano or guitar and occasionally a light flourish of woodwind, strings or brass might make an appearance.

But generally this is an album that keeps things stripped back, which means those raw emotions are right in the spotlight.   It opens with Mantra, a delicate acoustic guitar and vocal introduction, where Sundfør proclaims herself to be as clever as a crow, as lucky as the moon, and as mighty  as a shark. It’s such a basic song, it’s practically a nursery rhyme, and as a second melody is introduced, for just a moment, it sounds a little like Laura Palmer’s theme.

Reincarnation finds Sundfør disbelieving the news (it’s all fake these days anyway isn’t it?), questioning mortality and the nature of love, all the while and surrounded by some achingly beautiful slide guitar. There are country tones on a number of these songs, not least on Undercover, a tune that makes little attempt to hide the fact that it is apparently modelled on Dolly Parton’s songs. With lyrics like “don’t trust the ones who love you, cos if you love them back, they’ll always disappoint you, it’s just a matter of fact” Sundfør wears her heart on her sleeve, but does so with such elegance and charm in her voice that, when she hits the climax with “it wouldn’t it even matter, if you didn’t even bother to be more than just a lover”, cynicism gets washed away by her gorgeous delivery.

Away from the country inflections, the album explores a number of avenues. Good Luck Bad Luck taps into lounge jazz at its close, whilst folk guitar and harmonies make frequent appearances too. There are occasional flourishes of electronic noise too that, juxtaposed with spoken word sections and field recordings of streams and the sounds of nature, make for a condensed version of Koyaanisqatsi. Elsewhere, built on a simple arpeggio progression and sung in disarmingly hushed fashion, The Golden Age is so delicate, it almost isn’t there. There are hints of jazz, folk and electronica at work, but its real roots lie with Feed The Birds from Mary Poppins, a song that not only deals with keeping the wildlife well fed, but also concerns social responsibility and empathy. For a song so delicate and gentle, there’s a surprising amount going on here.

At the close of the album is Mountaineers, a duet with John Grant. It’s here that Sundfør really takes it to church, tapping into gospel influences, throwing a church organ into the mix, piling on the reverb and tugging on the heartstrings dramatically. Grant’s droning presence is wonderful, naturally (and hints once again at the opening sequences of Koyaanisqatsi), but it’s Sundfør that steals the show with the most impassioned performance of the album.

Music For People In Trouble will perhaps be a surprise for those who came to Sundfør via her last album, but they won’t be disappointed. This is an album full of hidden depths, stark emotion, and most importantly, absolutely beautiful songs.