Suzanne Vega – An Evening Of New York Songs And Stories 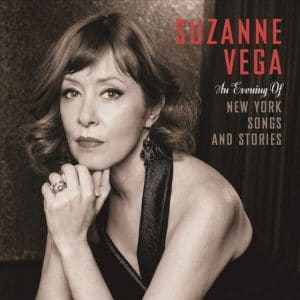 Born in Santa Monica, California, Suzanne Vega moved to New York when she was just two years old. Raised in Spanish Harlem and the Upper West Side in Manhattan, she was swarmed by an eclectic mix of cultures and music and began writing songs as a teenager. She would trade her receptionist duties during the day for hanging in Greenwich Village’s Songwriters Exchange at night and was soon playing at venues like The Bottom Line and Folk City.

Rejected by almost every record company, her eponymous debut album was a surprise smash and her single Marlene On The Wall crossed over the Atlantic to light up the UK charts. Her second album Solitude Standing cemented her as doyenne of new wave folk, and would lead to her having a massive international hit with Tom’s Diner some 13 years later, when the song was remixed by DNA, not to mention her being christened “Mother Of The MP3” when the track was used to hone the compression algorithm of MP3s. She has an enviable back catalogue, working with then husband Mitchell Froom on two albums, and the deeply personal Beauty & Crime, a Grammy award winning reflection of New York following the loss of her brother and post 9/11. It features heavily on her new live album An Evening Of New York Songs And Stories.

It opens with a stunning rendition of Marlene On The Wall with some concertgoer applause that sounds alien in this age of coronavirus. The ode to Marlene Dietrich crackles in a live setting with some divine guitar strumming from long-time collaborator Gerry Leonard. Followed by her massive hit Luka, this poignant song about child abuse has lost none of its appeal, with Vega’s lilting vocal style and some wonderful guitars. You get the sense that she is drawing in those not too familiar with her work by kicking off her set with her two biggest hits, and this sets the tone for an affecting, cathartic and personal evening.

The set has obvious signposts for a New York tribute. New York Is A Woman is a beautiful and cinematic prose, pitching the metropolis as a woman you become quickly enamoured with as she draws you in, for all her faults. Frank and Ava depicts the tempestuous relationship between Sinatra and Gardner with rough guitars and jarring narrative and New York Is My Destination is taken from her play written as a tribute to author Carson McCullers. A thumping rendition of Tom’s Diner replete with strings and dirty bass adds melodrama to the a cappella and stark original, and brings the house to rapturous applause.

There are some curious and engaging intro stories to songs, such as the celestial Gypsy, which was written while Vega was the folk-singing and disco-dance counsellor at a sleepaway camp, and citing a Lou Reed concert in the late ’70s as a catalyst for her own vision of contemporary folk, weaving into a bass-driven sincere cover of Walk On The Wild Side, underpinned by some wondrous soft strings. But Anniversary is perhaps the album’s standout. A sanguine ballad detailing the trauma of post-9/11 New York City, it has added heft with the album being released on 11 September. Vega’s depiction of Manhattan as corners and streets filled with ghosts and memories, with daily braveries and new-found courtesies, shakes your emotional core and leaves you with a heavy heart. Vega then bursts into the rousing Tombstone to “not leave you too sad”, yet closes the show with Thin Man (an ode to the Grim Reaper) with her tongue firmly in her cheek.

Cafe Carlyle is the perfect venue for Vega, a small, bohemian and glamorous venue in Manhattan’s Upper East Side, and this fitting tribute to New York praising its riches, uncovering its faults and exploring its tragedy is as beguiling and incredible as Vega herself.