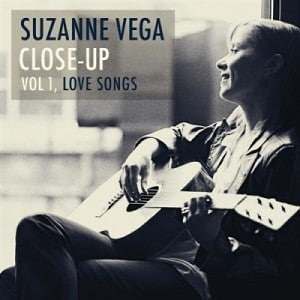 Had Suzanne Vega appeared in the ’60s or ’70s, her name would be mentioned in the same breath such legends as Bob Dylan, Joni Mitchell or Lou Reed. Possessing a great voice, a wonderful way with a melody, and a remarkable lyrical dexterity, Vega has it all.

Her songs verge on the poetic, handling imagery with a precision that is striking – a mix of metaphor, messages and carefully loaded ambiguities. For some reason in terms of wider recognition, her star waned almost as quickly as it flickered into life with the one song everyone remembers her for – Tom’s Diner. Yet Suzanne Vega persevered, releasing a number of albums over the years, and she continues to be one America’s most important and influential songwriters of the last quarter of a century.

Close-Up Vol 1 is the first step of an ambitious project. This album is to be the first of four, where she revisits her old work and reinterprets it in a more intimate manner. It’s easy to forget that she was dabbling with pop-production, industrial sounds, and electronic beats on much of her early work; this album returns to her folk roots.

Stripping these songs to their bare bones has breathed new life into them, and nowhere is this more evident than on Marlene On The Wall. Slowing the narrative of down considerably has added drama to the conundrum at the heart of the song, where Vega contemplates a relationship that is taboo at best, and possibly violent at worst. Whatever the context, this new stately pace and Vega’s breathy vocals make it feel more personal whilst giving Vega time and space to ruminate on the complexities of whether her protagonist has made the right choice, or whether she even had a choice at all.

Although tagged as love songs these are not archetypal romance tunes. Marlene On The Wall seems to be about lust, as does the haunting exploration of an older man/younger woman relationship, I’ll Never Be Your Maggie May. Harbour Song, from her album Songs In Red And Gray (made in the aftermath of her divorce from Mitchell Froom) deals with love, loss and disappointment. Its sparse form ratchets up the despair and tenderness that exist in constant conflict within the lyrics.

Gypsy also benefits from the stark approach. With no bass or drums it is the sound of Vega lost in a world of intimacy and immediacy. Its beautiful images were surely meant to be whispered from one person to another – there was no need to get a band involved.

Suzanne Vega’s career has long been overdue a reappraisal. That she’s chosen to do it herself in this manner is reassuring. Who better to set the record straight after all? She might not have had the success of her contemporaries, but this collection of songs goes some way to proving what talent she has, and that she deserves wider recognition.