Suzanne Vega – Tales From The Realm Of The Queen Of Pentacles 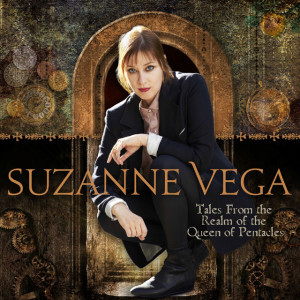 Tales From The Realm Of The Queen Of Pentacles? A song title called Portrait Of The Knight Of Wands? A sample of 50 Cent‘s Candy Shop? Has quintessential New York singer/songwriter Suzanne Vega decided to go quite mad and embark on a brave new direction combining prog rock and rap?

The answer is, thankfully, no. It’s been a good seven years since her last album of original material, Beauty & Crime, was released, and it did seem for a while as if she was content to just live off her glory days. Now, after four albums of re-recorded greatest hits, the rather unwieldy titled Tales From The Realm Of The Queen Of Pentacles provides a welcome opportunity to hear some new material.

She’s timed her return perfectly, thinking about it. The kind of folky pop she helped to popularise in the mid-’80s has undergone an impressive revival in recent years, with Laura Marling and Mumford And Sons becoming surprisingly popular in the United States (“I like the production on the Mumford records” Vega rather diplomatically noted in a recent interview), and there’s even been a Coen Brothers film focusing on the Greenwich Village scene where she made her name.

Despite the album’s title sounding like a rejected Yes opus, much of Queen Of Pentacles will sit comfortably with her core audience. It’s far from the winsome, fragile folk of her early days mind – age has given her a confidence and muscularity that suits her perfectly – but her willingness to embrace technology and new directions, means that she never sounds like an anachronism despite her long career.

Even that much talked about 50 Cent sample on the terrific Don’t Uncork What You Can’t Contain doesn’t sound particularly gimmicky – it’s the swooping Arabian-sounding strings that feature, rather than Curtis Jackson’s mumbling rap – and it recalls much of the excellent 99.9F album where she embraced a more experimental, electronic sound than previously.

Her lyrics too are as intriguing as ever. Some are poetic and lyrical (the excellent lead single Fools Complaint seems to take the viewpoint of a domestic servant serving a monarch – “she throws away her finery, for us to fetch when it gets lost…she’s on the golden platform, I’m down here in the fields”) while others are hilariously straight-forward – the electrifying I Never Wear White simply celebrates darker coloured clothes: “I never wear white, white is for virgins….my colour is black, for the crone and the bastard”).

There are some moments that hark back to her acoustic roots, namely the beautiful Portrait Of The Knights Of Wands, which recalls one of her finest moments, The Queen And The Soldier, and the closing Horizon (A Road Beyond This One) is a beautifully crafted tribute to Vaclav Havel featuring the Smikov Chamber Orchestra from the Czech Republic and a lovely, mournful trumpet solo.

There may not be anything new or massively revolutionary to attract new disciples to the Vega cause, but Tales From The Realm Of The Queen Of Pentacles is another reliably excellent Suzanne Vega album. Hopefully it won’t be another seven years until we hear the next one.