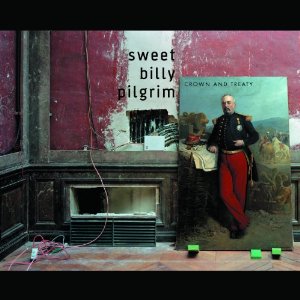 For all the understandable ire and frustration it provokes, the Mercury Music prize often serves a positive purpose. A prime example of this has to be the nomination in 2010 of Sweet Billy Pilgrim’s outstanding Twice Born Men, a brilliant, meticulously arranged odyssey with a wondrously ambivalent relationship with the mainstream and with the conventional values of songwriting. That nomination brought Tim Elsenburg and his excellent band to much wider attention, and Crown And Treaty, the band’s third album, is being distributed by a major label.

The good news is that Crown And Treaty does not veer too far from that successful template, although it does develop it in frequently fascinating ways. The album is bookended by two moments that flirt fleet-footedly with popular appeal. The jagged riffing and melancholy melodies of Joyful Reunion serve as a reminder that obvious comparisons between Sweet Billy Pilgrim and Elbow are far from fatuous, a point underlined by the insistent chorale that takes over towards the song’s conclusion. The final track, Blue Sky Falls, ends the album on a note of blissful, transcendent optimism.

In between, of course, more or less anything goes, often within the space of one song. Many of Elsenburg’s carefully crafted pieces feel like miniature symphonies. The production is precise and pristine (perhaps unfashionably so) and a staggering degree of care and attention to detail has been deployed in making this album. It is not one for blasting from tinny mobile phone speakers at the back of the bus but rather one for total immersion.

Crown And Treaty seems brilliantly balanced between some nimble, thrilling grooves (often in asymmetrical time signatures) and moments of melifluous, melancholy, folk-tinged beauty. There is, however, a sense of both cinematic grandeur and thoughtful reflection that runs throughout the entire collection, threading many disparate elements together with extraordinary success. It remains rare to hear music this ambitious and lofty – but it is not hubris. The consummate ease with which Blakefield Gold dances or the sheer accuracy of Archaeology or Brugada more than demonstrate the band’s combination of skill and creativity.

Whilst Elsenburg’s songs often veer off at completely unexpected tangents (such as when the rhythmic drive of Archaeology suddenly evaporates into what feels more like a contemporary classical landscape), he has obviously thought very carefully about the melodic aspects of composition. His melodies are often sophisticated and protracted, but they are always very carefully mapped out. The long, graceful notes in the chorus of Arrived At Upside Down contrast neatly with the crepuscular activity of the verse. Similarly, Blood Is Big Expense has a carefully controlled, elegiac tone.

So, whilst Elsenburg’s deft combination of the melancholy and the anthemic could easily border on the manipulative, it’s his more subtle flourishes and hints of weirdness that make this music so compelling. It also helps that he has a band that rise to the challenge of this unashamedly serious music. New member Jana Carpenter’s vocals provide a warm and empathetic foil to Elsenburg’s often introspective musings. This is a regal, thoroughly resplendent album and it’s unlikely that there will be another this year to better and more subtly subvert the mainstream.