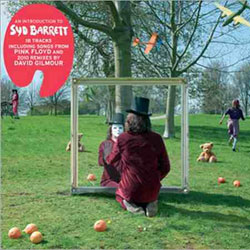 This best of / tribute / introduction to the work of troubled (arguable) genius Syd Barrett, early member-cum-leader of Pink Floyd before his sad solo decline was originally put together last year. After the reclusive Barrett’s death in 2006, Floyd’s David Gilmour wanted to build on the renewed interest in his erstwhile band-mate, and was closely involved in the collection. Indeed, Gilmour even went so far as to collaborate on some of the remixes, working on Matilda Mother, Octopus and She Took A Long Cold Look, as well as contributing bass guitar to the originally bass-less Here I Go.

The collection is also notable, historically, as being the first time that Pink Floyd tracks have stood alongside Barrett’s solo material on one release. The album has now been re-released, on 180g vinyl, for 2011’s Record Store Day.

The early Floyd tracks exhibit that particularly English brand of whimsy at which Barrett excelled: See Emily Play (perhaps his finest moment); the curiously menacing Arnold Layne, the peculiar yet compelling tale of the cross-dressing clothes thief. Apples And Oranges and Bike both show a genuinely oblique and quirky outlook, the naivety appealing, genuine and fresh-sounding.

Terrapin was the opening track on Barrett’s first solo album (The Madcap Laughs), and the melancholy of his increasingly difficult circumstances are almost tangibly present. He sings of “fangs all around” to a sparse, bluesy guitar backing, and it is difficult not to read more into lines like “Oh baby, my hair’s on end about you” than a simple interpretation about love gone wrong. Of Madpcap’s other tracks featured (Love You, Dark Globe, Here I Go, Octopus, She Took A Long Cold Look, If It’s In You) the free-association Love You is the charmer, its lyrics and the jaunty instrumentation retaining the spark from his earlier work (“ice-cream excuse me / I seen you look good the other evening”).

Dark Globe and She Took A Long Cold Look are, well, darker, as Barrett sings of how “my head kissed the ground” and the “stone from your heart”, pleading “Won’t you miss me? / Wouldn’t you miss me at all?” in the former, and bemoans how “She hasn’t time just to be with me” in the latter. Octopus, one of two tracks with false-start beginnings, features staccato vocals and a minor-key tune. If It’s In You sounds more seriously tortured/troubled, and is perhaps the stage at which the listener begins to feel the uneasy sense of voyeurism in the singer’s psychic and mental decline.

The remaining tracks featured are from Barrett’s self-titled second album which followed on quickly from the release of Madcap. Baby Lemonade (“I’m screaming” / “You’re nice to me like ice”), Gigolo Aunt (“Grooving around in a trench coat”), Effervescent Elephant (which could almost be a wacky song for kids) all bear witness to Barrett’s remarkable and unique way with imagery, seemingly retained even at this point. By this time, though (1970), his behaviour was becoming ever more erratic, and the album’s relative failure to make a mark, coupled with his increasing restlessness saw him retreat to his hometown, Cambridge, for three decades of reclusiveness and withdrawal from music.

The album ends with Bob Dylan Blues, a rare recording – again from 1970 – that serves as an appropriate yet poignant closer. The wit – tinged with anger as he sends up “Mr Dylan, the King” – only serves to underline the contrast between the American singer’s fortunes and his own. This convenient eighteen tracks, then, serves its purpose well as an introduction to, or overview of Syd Barrett’s oeuvre, tracking his development and decline but always capturing the spirit of this influential one-off.