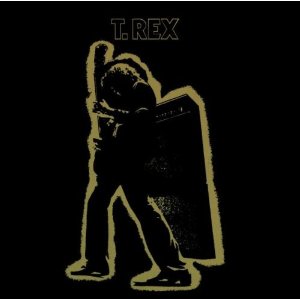 Originally released in September 1971, T Rex’s Electric Warrior is often touted as a cornerstone of glam rock, arriving as it did nine months before David Bowie’s Ziggy Stardust. But aside from that, one could argue that Electric Warrior is one of the coolest albums ever recorded. And 40 years after its initial release, it still sounds cool and irresistibly hip where some of its contemporaries and glam successors have taken on a dated, sugary-sweet, nostalgic coating of dust. To commemorate the album’s 40th anniversary, Universal have released a deluxe edition with a bounty of extras rich enough to excite the dedicated fan, but accessible enough so as not to frighten off the inquiring new listener.

Perhaps the key to the album’s apparent lack of age-spots is Marc Bolan’s subdued, hip-shot, sex-crazed vocal delivery, or producer Tony Visconti’s sterile, carefully constructed sound field with its pristine snare drums, psychedelic guitar flourishes, and the occasional saccharine string run or choir-like background vocals. But central to the album’s greatness is the iconic nature of its imagery and the simple manifesto implied by its title: Bolan, silhouetted in yellow on the album’s cover, wields his guitar like a weapon, perched defiantly in front of an outsized guitar amp like a maniac with his twitchy finger testing the limits of the trigger’s resistance. The whole album feels like it’s ready to blow at any point, and it’s mesmerizing to lie between the speakers while Bolan and company maintain the madcap machismo of their rock ‘n’ roll high-wire act.

The album’s opener, Mambo Sun, thumps and writhes in its own heat as Bolan whispers lasciviously, “I’m Doctor Strange for you”. Here we get our first taste of the mid-heavy warmth of Bolan’s guitar tones that will make up the album’s sonic palette. It’s a sound that was largely abandoned throughout the following decades by big rock stars trying to capture the arena sound on record using big reverb to inject their albums with an artificial sense of space.

Cosmic Dancer adds an element of melodrama with its string flourishes. Jeepster, Lean Woman Blues, and the mega-hit Get It On encapsulate the album’s obsession with re-appropriating blues sounds in ways the Rolling Stones never imagined. And, Life’s A Gas remains a slow-burning revelation, woozy and swaying in its laid-back approach. Rip Off closes the album at fever pitch with manic energy and an intense rhythm that risks coming unhinged at any moment.

The first disc of this reissue includes B-sides from the album’s singles, including Hot Love and The King Of The Mountain Cometh, among others. And a second disc of 21 previously unreleased outtakes, demos, and promos includes some real gems, from home demos to working versions, instrumentals, and studio chatter. The real draw is the album itself, but these extra tracks provide a deeper look into the album’s genesis, as does the new 21-page essay by rock critic Mark Paytress. Forty years later, Electric Warrior still sounds new and fresh, and an excellent array of extras make this deluxe edition a necessary listen for T Rex fans.