Tamar Aphek – All Bets Are Off 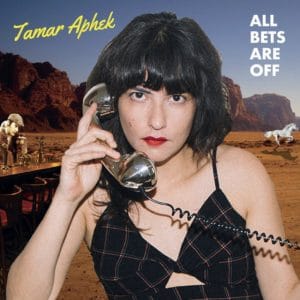 That voice, so confident and direct in its assault, catches you off guard, emerging initially without a trace of guile or manipulation. It’s so inherently smart and powerful that the swampy torrent of purposefully ugly guitar on All Bets Are Off’s first track Russian Winter has no choice but to stop in its tracks upon hearing it. Only the tin can sharp drums can attempt to keep up with Tamar Aphek when she gets going. Though she hails from the nascent rock scene of modern day Israel, her dignified pronunciation is reminiscent of Stereolab’s Laetitia Sadier at that group’s ’90s peak, navigating its way through the song’s deliberately wobbly ominous centre.

That feeling of rigid dominance and emotional isolation carries itself over into the misty gangster menace of follow up Show Me Your Pretty Side, but there’s also a clumsy attempt at appearing seductive, even if it comes across more as intimidation. Once more the guitar seems to shrink away into the background, such is the charm of Aphek’s echo laced intonation. It doesn’t vanish completely though as there are snatches of dastardly bass skulking off in the corners and hints of a riff swirl with the occasional intimidations of saxophone towards the song’s finale.

Aphek’s childhood was spent within piano conservatoires and vocal choirs before her early teen discovery of classic and alternative rock led her down a different path. Specifically drawn to the more unconventional artists such as Sonic Youth and Slint who favoured idiosyncratic time structures and spare narrative delivery, it’s apparent that Aphek was no doubt also a fan of Twin Peaks; such is the album’s reliance on agitated jazzy atmospherics and the impression of mid-century dread that propels tracks like All I Know and Drive. It would also explain why she chose to work with Greg Calbi, who mastered albums by iconic artists like David Bowie and The Ramones, and signed with seminal indie label Kill Rock Stars to put out the record internationally.

Too Much Information starts off in cruise control, with familiar chalky verses, twangy minimal guitar work and skittish drum syncopation, but it keeps getting interrupted by fragments of a guitar flourish pinched from the intro to old Looney Tunes cartoons, and the percussion unfurls into chaos, with Aphek repeatedly chanting “Look at you acting like a madman” – it is indeed cartoonish, manic and disruptive. The blanketed thump of Crossbow that apes the pummelling energy of Led Zeppelin’s Immigrant Song acts as the devilish foil to Aphek’s determined and villainous narrator, caught in a cat-and-mouse game with some unfortunate victim, and on Nothing Can Surprise Me we get Aphek and band in full Exile On Main St desert blues drag.

The album comes to a far too sudden close with a rendition of the old Warner Brothers standard As Time Goes By, Aphek distractedly strumming her unplugged instrument as the tracks air of optimistic wartime reverie prevails. Giving a cheeky wink to those who’ve found themselves silently swept up in her thrall, she leaves everyone hoping that’s not all, folks.

More on Tamar Aphek
Tamar Aphek – All Bets Are Off