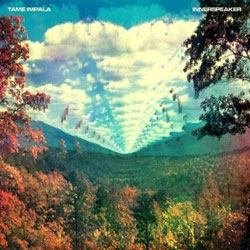 Psych Rock in 2010 sounds charmingly quaint. It’s the kind of music you wanted to make when you were around 12 years old and your entire music palate was more or less equivalent to what your Dad thought (and still thinks) is hip. Not that there’s anything wrong with the immortal influences of latter-day Beatles, Pink Floyd and of course the forever, and (somewhat) unjustly maligned The Doors, it’s just that it sounds rather… goofy in this day and age.

It’s odd to think a band like Tame Impala could exist past university. They embrace the warm, prismatic, highly drug-addled world of ’60s-loving rock with big glassy-eyed hug. And you know what? They succeed more than they fail.

The best thing you could say about Tame Impala is that they restore a decent amount of topicality to the realm of psychedelia. They by no means sound like 2010 band, but they spread their sonic definition wide enough as to not be lumped into a specific niche, and more importantly, a specific epoch. At times they sound bluesy as hell (The Bold Arrow Of Time) coming off like a Black Keys counterpart with more haze; at other times they’re just doing their best Revolver – check the faded euphoric Lennon-as-hell vocal flight on the back half of Desire Be, Desire Go – and occasionally they play a particularly astral take on 2009’s chillwave scene. That consistent change-up at least makes most of Innerspeaker interesting, but Tame Imapala only occasionally hit real paydirt.

They save their best two songs for last, the titanic, mantra-like psych-anthem Runaway, Houses, City, Clouds uses the seven minutes it’s given quite well, morphing through several acts of fuzzy Jefferson Airplane-esque poundings – rounding out into one of the more thoroughly listenable seven minute songs out there. Closer I Don’t Really Mind ends the album perfectly, sounding like the propelled but content end to a particularly eventful trip. Those end up being the moments where you could call Innerspeaker ‘great.’

The problem is, they end up with an inordinate amount of half-baked gobbledygook to get there. A worrying number of songs on Innerspeaker, while aesthetically pleasing, are pretty hard to pay attention to. It particularly gets lost in the middle, the three song trajectory of Why Won’t You Make Up Your Mind? Solitude is Bliss and Jeremy’s Storm is far more style than substance, uninspired guitar noodling drenched in reverb just for the hell of it, and spacey textures that don’t add anything besides kitsch. Remember how Yeasayer‘s Odd Blood was weighed down by a decent chunkage of empty songwriting? Innerspeaker has the same problem; it occasionally gets too smart for its own good, and the record suffers for it.

However the songs that do work rock pretty hard. Innerspeaker is the type of album that might be a little hard to admit liking – it’s self-serious, self-righteous, overlong, and occasionally infuriating. But when it does find its groove, most of those apprehensions are flattened. If anything they should be cheered for somehow creating an original Psych Rock album in 2010, for that isn’t easy to do.