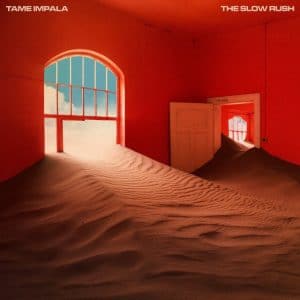 £41.25. You’ll know, because you were there, that this was all it cost for two tickets – with unnecessary cancellation protection – to see Kevin Parker’s Tame Impala at the Brixton Academy in 2012, before the world ended (as Nostradamus predicted) and we were thrown headlong into a dark multiverse, surrounded on all sides by visions of Donald Trump in the White House and bat flu and Brexit.

You’ll also know that just before the world was warped through that wormhole of horror that Kevin Parker tried his best to save rock ‘n’ roll with the thunderous, apocalyptic riffing of his most powerful weapon – Elephant – before blasting himself through the cosmos like an Antipodean He-Man astride a planetary Battle Cat to try and avert the destruction of time and space. He failed. He couldn’t save rock ‘n’ roll. But he promised to return.

Here in the dark universe, we waited for the triumphant return of the chosen one. In 2013, there was no third Tame Impala album. In 2014, we heard nothing. Then, as 2015 rolled around, we heard something. There was something rumbling deep in the bowels of the furthest reaches of infinity. We heard rumours of what was to come. All the gods of rock ‘n’ roll would die off, one by one, but they would leave the universe in the capable hands of Tame Impala and a strange girl with slime-green hair who would rap to us all in a barely-audible monotone. And there was to be rock ‘n’ roll, because Kevin Parker had taken that with him on his multiversal travels, and under his care it had survived, and thrived – raised from the ashes on a diet of Daft Punk and yacht rock.

In 2015, Kevin Parker returned. And he had written the best rock ‘n’ roll album of all time and space, and it was called Currents. When Kevin Parker left this universe in 2012, he took Thriller and Purple Rain and Moon Safari and Screamadelica and the entire collected works of Yes, and melted them into one molten disc of pure rock ‘n’ roll, dusting them with the ashes of burning universes. When Kevin Parker returned in 2015, he brought rock ‘n’ roll back to life with a single disc, and it sounded more like Supertramp than ever.  The guitars were shinier, the bass was wobblier, the grooves were funkier, and the harmonies were more harmonious than ever before. God, if only we knew what was to come next…

The Slow Rush is the fourth Tame Impala album. Rather than open the new album with a progressive robo-yacht-funk masterpiece like Let It Happen, Parker opts to open The Slow Rush with One More Year, which cleverly (ironically) incorporates all of the worst things about ’90s chillout club music and makes it sound remotely listenable. Then you have Instant Destiny, which ventures back into Currents territory, with its irrepressible bass line and piercing, church-organ-loud synth sounds.

Next, it’s Borderline. As you know by now, Borderline takes all of the worst things about music in general and repackages them into something that’s highly listenable – enjoyable, even. White man moaning about the after-effects of taking too many drugs? Check! Congas or bongos (who cares)? Check! Glassy sounding electric piano? Check! Baggy beat? Check! SYNTH-FLUTE? CHECK! It’s a great little tune, and all the better for blending all of these horrific elements into one unwholesome whole. And if The Weeknd took the intro guitars from Iron Maiden‘s Hallowed Be Thy Name, blended it with an Isaac Hayes or Marvin Gaye bass groove, then handed the resulting mix over to Justice to tinker with, you’d end with something that sounds as preposterous as Posthumous Forgiveness. If you were after “THIS ALBUM’S APOCALYPSE DREAMS!!!!”, you’ve found it with Posthumous Forgiveness.

If you’re after tracks comparable to styles Parker’s nailed before, Breathe Deeper replicates the strutting, rutting rush of his magnum opus, Let It Happen, it just does it in a condensed, super-saturated way. And of the tracks released to preview the record, Lost in Yesterday was far and away the best song, with its rubbery bass and squelchy sci-fi synths custom-built to shoot laser beams out into a crowd of joyous faces. But Is It True has sonic callbacks to both Lionel Richie and Michael Jackson – imagine a Pretty Young Thing dancin’ on the ceiling and you’re close to the gloopy, sticky rush Parker conjures.

It Might Be Time, which follows, is one of the heavier selections, with a focus on the monstrous, molasses-thick rhythm section and siren squeals. The clattering drums and distorted bass lock together in a rowdy, sexy embrace, while glistening organ synths wash across the stereo field. The final two tracks take a couple of chances. Glimmer takes the album slightly leftfield, evoking Cabaret Voltaire if they had been equipped with Daft Punk synthesisers, while One More Hour is filled with warped, backmasked sounds – almost certainly the tracks for One More Year played in reverse.

It’s amazing how true auteurs constantly shift their attention, shift their style, but always retain a razor-sharp focus on the artistic integrity of their projects. Kevin Parker is a true auteur, an artist who has moulded pop music to match his incredible vision. Who’d have known that was coming back in 2012? Kevin Parker, that’s who.