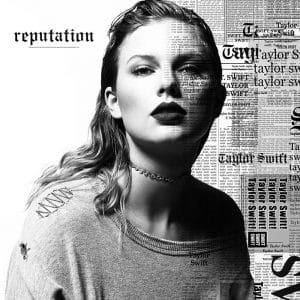 So, how to follow up an album like 1989? Taylor Swift‘s fourth album was a true modern pop classic, a record that seemed to define the zeitgeist and was full of instantly catchy, addictive songs. It was the record that completed Swift’s transformation from fledgling young country music performer to full-on pop star, and even inspired Ryan Adams to do a track-by-track cover album. That autumn, and for the next 12 months, it was impossible to avoid Swift as she cemented her position as the biggest pop star in the world.

However, it was also around this time that doubts began to creep in about the perfectly constructed image that Swift had constructed. It could have been the endless parade of ‘best friends’ introduced to the audience on her world tour, it could have been the celebrity relationships that the paparazzi always seemed to be handily aware of, or it could even have been Swift’s decision to remain resolutely apolitical in an increasingly politically volatile world. Whatever the reasons, Reputation has the feel of a reboot and fresh start.

It’s not a totally drastic change of course – the team behind 1989 all return (Max Martin, Shellback and Jack Antonoff while there’s even a rather bizarre rap cameo from long-term collaborator Ed Sheeran on Endgame) – but there’s a conscious decision to go a bit darker this time around.

It made the comeback single of Look What You Made Me Do sound a bit jarring on first listen: the formerly wholesome Taylor metamorphosing into a vengeance-seeking electro-popper with a song that sounds like a cross between I’m Too Sexy by Right Said Fred and Black Eyed Peas‘ My Lumps. It still sounds suitably attention-grabbing, but there’s something about it that doesn’t quite sit right – it could be the fact that, despite the threats of the lyrics, there’s not much menace in the delivery, with Swift sounding as if she’s about to spill someone’s pint accidentally on purpose.

However, despite that song’s insistence that “the old Taylor is dead”, there’s much on Reputation that could easily sit with 1989’s songs. There are the same lyrics that winkingly reference her real-life romances (I Did Something Bad has an opening line of “I never trust a narcissist, but they love me”) and the same melodies that hook their claws into you at the very first listen. For, if there’s one thing that Swift and her team still know how to do, it’s write some beautifully lovelorn songs.

Gorgeous is a throwback to ‘old Taylor’, being a sweet, lilting declaration of love to her new mn – rather than the bass drops and fizzling EDM sound effects, she keeps it simple here, and it works beautifully. The same goes for Getaway Car, one of Reputation’s best tracks and one of the songs that Jack Antonoff most clearly shows his influence. It’s also Swift at her most lyrically intriguing, comparing the destructive drive of criminals in a getaway car to a toxic relationship (and is pretty obviously about her relationships with Calvin Harris and Tom Hiddleston, just to keep the internet detectives happy).

Rather than the bitter, revengeful Taylor that Look What You Made Me Do seemed to trail, the overall feel of Reputation is one of loved-up contentment. Dress is bound to raise eyebrows, being Swift’s most sensual song to date, with a chorus of “only bought this dress so you could take it off” while the beautiful New Year’s Day might be one of the best things she’s ever written, a lilting ballad that closes the album on an unexpectedly poignant note of “hold onto the memories, they will hold onto you”. It’s here that Swift is at her best – the songs that try hardest to be ‘edgy’ and harsh like the Kanye West-feud referencing This Is Why We Can’t Have Nice Things just come across as forced at best and sour at worst.

Reputation is never less than a fascinating listen though, and for all its flaws – it’s overlong, and sometimes seems too keen to be meta and self-referencing – it’s full of energy and often makes for an exhilarating listen. It may not quite measure up to the heights of 1989, but whether she’s Old Taylor or New Taylor, there’s enough here to demonstrate why she’s still one of pop’s brightest pop stars.