Tears For Fears – Everybody Loves A Happy Ending 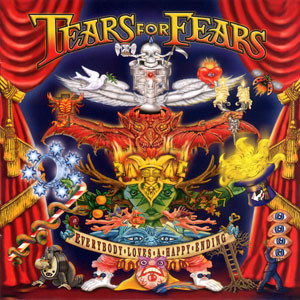 I know it’s a superficial subject to be judging a book/album by its cover but in this case I’ll make an exception. One glance over the conceptual cover art for this, the first and last, Tears For Fears reunion should indicate what horrors lie within – theatre curtains frame a collaged clown performing a handstand. Who do we have to thank for having TFF thrust back upon us like an unwanted gift? A large bunny with fractious personality disorder. Cheers Donnie. It truly is a mad, mad, mad world.

Lest we forget, the Fears (as they were never called) hailed from the mists of time known as ‘eighties-dom’ where the mullet ran free (as a hairstyle not yet mocked), production was BIG and from humble beginnings they took us into their clunking, introspective, Mad World up to the point where they wanted Everybody to ‘Run The World’ and beyond to be Sowing The Seeds of Love. Since then they split to various levels of obscurity before being lured in by the big bucks/ buck-toothed star of the Donnie Darko soundtrack catapulting them out of the shadows back onto the stage.

Those looking for the spooky simplicities of Mad World should look elsewhere. This is the sound of essentially one man, Roland Orzabal, grown up, got rich and trying to get deep. Curt Smith seems to be present only in name, as part of some elaborate contractual obligation, as Orzabal has the singing duties firmly baggsied. If their last outing together Seeds of Love was portentous, dated and owing in no small part a debt to the layered psychedelia of The Beatles, this positively runs naked down McCartney street, screaming ‘I loves you Paul…’.

Cod-ELO psychedelics, and none more kitchen-sink than thou over-egging to the fore. Unfortunately it comes over as a hollow, disjointed music fan’s wide-eyed homage to his heroes (Beatles, ELO, Moody Blues). Bloated, plodding stodge rock with nothing new to offer. It defines how out of touch, and time, TFF are with these vague world whimsies.

Opener Wake Up sits uneasily on the ELO/Beatles fence without a whiff of irony or taking it to new places as Grandaddy do.it veers drunkenly between multi-layered psychedelia and winsome acoustic passages to no great effect. It progresses at a sluggish pace with more trite clichés and vacuity than humanly possible. There is, dear readers, a song called Who Killed Tangerine?. Be afraid. Be very afraid. More so, that it is a weak retread of Sowing The Seeds of Love.

Elsewhere, Call Me Mellow brings to mind a La’s reject, layered in ’60s harmonies. The only respite from the over-busy effects, toppling harmonies, and general ‘weight over wisdom’ of most of these tracks comes in the almost throwaway ‘bonus track’ Pullin’ A Cloud. Simple, acoustic, and despite the equally ‘abstract’ lyrics, it does possess a glimmer of their charms of old.

This is a band that really has nothing left to say. The only question remains if there are enough nostalgic fans willing to forgive this shuffle into blandness and listen.