Teddy Thompson – A Piece Of What You Need 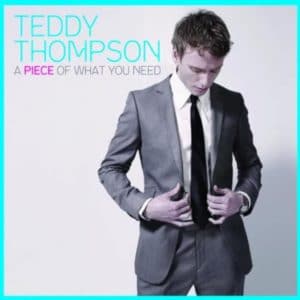 “It’s getting harder and harder to live with myself,” sings Teddy Thompson at the start of his fourth album, setting the tone for a collection of songs full of anguish, regret and loss. Whatever personal crisis can be read into the lyrics, A Piece Of What You Need also happens to be the best album of the golden voiced singer-songwriter’s career.

Thompson’s musical heritage is well documented. The son of folk rock legends Richard Thompson and Linda Thompson, he has inherited the musical versatility of his father and the sweet, country-inflected vocals of his mother. He spent his late teens and early 20s in Los Angeles, striking up a friendship with Rufus Wainwright that has proved enduring (fans of Rufus should check out the video for this album’s lead-off single In My Arms, which features his flamboyant cameo dressed up as Elvis Presley).

Thompson’s earlier albums featured some lovely melodies but flitted rather distractedly between a range of styles, with his love of country music taking centre stage on 2007’s Up Front & Down Low covers album. Marius de Vries, who met Thompson during recording sessions for Rufus Wainwright’s Want albums in 2002, does a fine job this time round, creating an atmospheric sound that is busy but never fussy. The production puts Thompson’s vocals centre stage, allowing the listener to hear every word in stark detail.

Indeed, it is Thompson’s way with words that propels A Piece Of What You Need above the ordinary. Here, Teddy comes out as the true inheritor of his father’s barbed wit and intelligent lyrical constructions. The album is chock full of wonderful bon mots, with Jonathan’s Book (“He’s planning on at least a thousand pages/It has to be a story for the ages/But from War & Peace to How To Cook/There’s not much left for Jonathan’s Book”), Turning The Gun On Myself (“The morning is bright as Rapper’s Delight”) and A Piece Of What You Need (“Drop dead gorgeous teen/Singing pages from her diary/So bad you’d kick her out of bed”) offering up some prime examples of Thompson’s understated humour.

Not that Thompson is above flashes of disarming sincerity (“I figured it out/I need you”), and the result is both utterly contemporary and redolent of the golden age of the urbane sophisticates Cole Porter and Hoagy Carmichael.

Richly melodic and beautifully performed, A Piece Of What You Need deserves to be a big commercial hit. There is a nagging feeling, however, that Thompson’s dry wit and reserved Englishness will continue to consign him to the cult status that has bedevilled his father’s career.