by John Murphy
published: 29 May 2020 in Album Reviews
Tweet 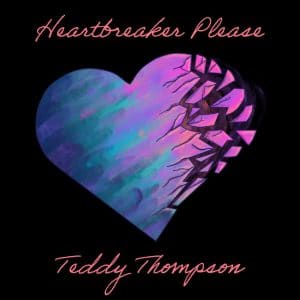 It’s been nine years since Teddy Thompson last released a solo record, but he’s not been lazing around since 2011. He collaborated with Kelly Jones (not of the Stereophonics) in 2016, and brought the entire Thompson clan together in 2014 for the Family album.

It seems he’s also been through the mill emotionally, as most of the songs on the appropriately titled Heartbreaker Please are about heartbreak. Where a lot of break-up albums ramp up the intensity though, Thompson takes the light and breezy approach – most of these songs have a wry, bittersweet quality, exemplified by the opening track’s Why Wait key lyric: “Why wait for you to break my heart?”.

As the son of rock/folk royalty (Richard Thompson and Linda Thompson are his parents), well crafted pop songs are literally in Thompson’s genes. Heartbreaker Please is full of pleasant, radio-friendly songs that immediately feel cosy and familiar. That’s not a criticism – the horn section on Why Wait lifts it up another level, and Thompson Senior adds his trademark fizzy guitar to the title track.

That said, it would be nice to hear a bit of fire. Sometimes, Thompson’s songs drift towards blandness, and sometimes he sounds far older than his 44 years. Record Player in particular just sounds like an old man shouting at a cloud, as Thompson berates the state of modern music and wishes songs could be more like they were in his day. It’s hard not to roll your eyes at lines like “They’re not playing my song, they’re playing something that sounds like nails down a blackboard”.

Thompson’s more successful when he concentrates on affairs of the heart. There are some gorgeous ballads, particularly the mournful Brand New, and the swirling strings on Take Me Away tug at the heartstrings. At times, it can be the perfect record to wallow to if you’re feeling a bit emotionally fragile.

The general mood is laconic and laid back, although It’s Not Easy flirts with rockabilly, but the slow pace serves to emphasise Thompson’s lyrics, which can be surprisingly poignant. At A Light sees him reassuring his former lover that “You’re gonna miss me”, and It’s Not Easy opens with “Try to understand that I want the best for you, but it’s not easy”. It’s never bitter, but delivered with an air of weary resignation, which works really effectively.

Heartbreaker Please, like much of Thompson’s output, is unshowy yet quietly effective. He can document emotions that anyone can identify yet never comes across as bitter and twisted. The flipside of this is that the album can sound a little too cosy, where you’re often yearning for something a bit more raw and less polished. Yet if you’re looking for some timeless, classic-sounding pop, then Thompson does a very good job.