Teen Daze – All Of Us Together 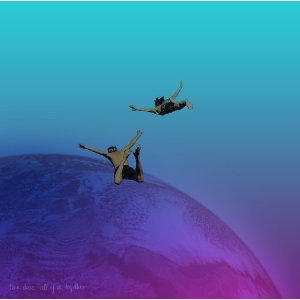 By now, you’d have thought that chillwave would’ve run its course. There are, after all, only so many times you can listen to hazy, drawn out melodies accompanied by mysterious images. This being the case, it would seem that no-one thought to tell Teen Daze. The Vancouver-based artist has tantalised and titillated the industry for a couple of years via an extensive package of EPs, collaborations and remixes, and has now unleashed his début offering. Given the protracted (though in fairness highly productive) gestation period, expectations are of a polished, complete record that belies its début full-length status.

Opener Treten sets the tone, with great aural swathes ebbing and flowing over its near seven-minute duration. Reflective and unhurried, it eases the listener into the the record gently, leading into the more upbeat Late. Built around a hypnotic keyboard line that bears more than a little resemblance to the backing track from James Yorkston‘s Woozy With Cider, it builds into something altogether more propulsive, underpinned by a languid yet percussive drum beat.

For Body And For Kenzie, much like the album as a whole, would well soundtrack the long fading evenings, the morning after the night before or even nocturnal adventures. As with Treten, it ebbs and flows as it runs its course, giving the impression of the track being allowed to breathe – almost in a literal sense. The New Balearic, meanwhile, makes a stab at Technique-era New Order, had it been created near a swimming pool in some exotic locale (depending on who you believe, that’s exactly what happened). As the record moves into its closing stages it’s left to Brooklyn and Erbstuck to provide the most uptempo moments of the album. Moving away from the vast soundscapes of earlier tracks, both belie their running times of over five minutes apiece, beco,ming immersive listening experiences in their own right.

This is a record with a lot going for it: it’s smart, well made, and confident. Yet, if it lacks one thing, it’s the ability to truly captivate. Take A Winged Victory For The Sullen‘s eponymous debut as an abstract example – it’s an undeniably reflective record, but it simultaneously arrests. Teen Daze’s first long-player, on the other hand, can pass a listener by without delivering so much as a blip on their radar, unless they make a conscious effort to hang onto its every note. Ultimately, it’s an accomplished record that makes all the right noises (in the most literal sense), but it lacks the final wow factor to push it into true greatness.

More on Teen Daze
Teen Daze – All Of Us Together