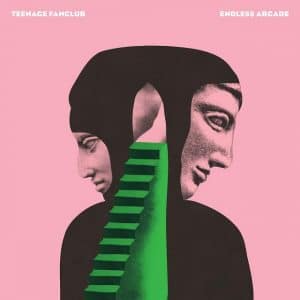 As their career has progressed, Teenage Fanclub have settled into an increasingly comfortable spot, delivering collection after collection of harmony-infused, melodic songs that very much give their fans what they want. There’s been a stability and consistency over the years that has possibly resulted in them being taken for granted, a seemingly ever-present musical landmark on the horizon.

In this context the departure in 2019 of Gerry Love, bassist and writer of some of the band’s most beloved material, came as an unwelcome and somewhat jarring surprise, momentarily moving them out of the shadows for a reason other than their heartening, endearing songs. Latest album Endless Arcade however sees them put the episode firmly behind them, as they both resume where they left off on 2016’s Here, but also mark a new path forward. Previous albums saw the trio of Norman Blake, Raymond McGinley and Love split songwriting duties equally, contributing four tracks each per album, and the egalitarian principle is maintained here, with Blake and McGinley now upgrading to six each.

Opening track Home shows how in many ways it’s business as usual, Blake leading us through seven minutes of mid-paced simplicity imbued with light and supreme agreeability. Like much of the album it provides comfort and reassurance in abundance, but his next pair of compositions see him vary the pace a little. Warm Embrace offers a two-minute-long shot across the bows of sorts, arguably the most dynamic and supercharged moment on the album. For those familiar with their back catalogue it might suggest itself as this album’s equivalent to, say, What You Do To Me on Bandwagonesque, Slow Fade on Man-Made or Straight & Narrow on Howdy.

In contrast, there’s a disarming innocence and skeletal vulnerability to The Sun Won’t Shine On Me. Both songs also introduce a poignant recurring presence in the lyrics of Blake’s songs that hint at relationship difficulties. On Warm Embrace he sings “I’m all forlorn for the loss of you and now I don’t know what I’m going to do” while The Sun Won’t Shine On Me strikes a similarly plaintive tone as he confesses how “I have lost any sense of belonging, I am drifting like ice on the sea”. They are some of the most directly first-person songs he’s written in some time, and the ensuing emotional reward for the listener is significant.

McGinley’s songs meanwhile see him preserve and develop the more understated style he’s perfected over the years. The title track offers a reshaped familiarity, avoiding any obvious routes and although Everything Is Falling Apart has been in the public domain for a couple of years now it fits in seamlessly here, both musically and lyrically. In Our Dreams is one of the best songs McGinley has penned in years meanwhile, built around a buzzy, snaking guitar line and a series of cleverly unfolding lyrics. In terms of personality McGinley may occasionally be seen as the more taciturn member of the band but musically this shows him at his expressive, emotional best as he pushes himself to inject it with additional feeling, looking back on how “we lived the dream, but we never knew”. Later, his other contributions like Come With Me and Silent Song are slower paced but have a resonating depth, and showcase how wisdom and sanguine level-headedness continue to infiltrate his songwriting. Given how much of the album is concerned with looking back, it feels both pleasingly balancing and suitably contrarian how one of his songs here is called The Future.

Blake’s contributions on the second half offer some of the album’s most affecting moments. I’m More Inclined shows his ability to write songs exploring human relationships remains as strong as ever and Back In The Day registers as one of his most effortless songs to date. “I’m downbeat, in a daze, a sad malaise has taken hold in my heart, I just can’t seem to find the peace of mind that I knew back in the day,” he sings, a genuinely moving exploration of his newfound situation.

The feeling continues on Living With You, another bittersweet episode that evokes sadness and empathy that someone so widely loved and respected as Blake should find himself in a position to write such songs. It’s also further proof of the band’s ability to expertly chronicle the passing of time and document life events while also confirming how these are heartwarming songs that are destined to be loved in the same way as their antecedents. Endless Arcade might be an album of recalibration and evolution, but it’s also one that more than holds its own against the lofty peaks scaled earlier in their career. Let’s never take them for granted again.