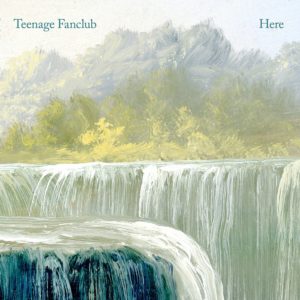 Teenage Fanclub may feel like a comfortable pair of well worn shoes, but it’s remarkable how infrequently they have recorded since the disintegration of Creation Records. With the band now scattered across both sides of the Atlantic (Norman Blake lives in Toronto), assembling the group is a logistical as well as artistic enterprise. Yet here they are again, returning with their third independently released album and still inspiring devotion in their loyal audience.

Not much about Here is in any way surprising. The Byrdsian jangle and Big Star inspired fuzz are still intact, as are all three songwriters’ distinctive qualities and their trademark vocal harmonies. As they have grown older, the band have adopted a total democratic split in the songwriting duties which means each album explores the notable differences in their respective writing styles, as well as capturing the places where they intersect. They have also drifted away from both the grungey distortion of their earlier records and also from the chiming brightness of the outstanding guitar pop albums they made at the height of Britpop. Francis McDonald’s drums sound dry, and the melodic lines now seem absorbed within the core of each song rather than reaching out to the forefront.

There is, however, something about Here that marks it out as a little stronger and more confident than its immediate predecessors. Maybe it is that Gerard Love particularly is on such top form or perhaps it’s the greater incorporation of the warm fuzz and duelling guitar lines that help make the band so enduring. Right from the outset, the songs on Here are honest and open in their sentiments. Blake’s fantastic opener I’m In Love is a sunburst euphoric rush, in which he professes “it feels good when you’re next to me, that’s enough, that’s enough”, seemingly embracing domestic bliss. One of Blake’s later songs Live In The Moment encourages an appreciation of the here and now with a joyous grasp of melody and phrasing. It’s notable that even when singing about more difficult subject matter (as on The Darkest Part Of The Night, a song that mischievously merges the best aspects of his earlier classics Start Again and I Don’t Want Control Of You), the band seem to radiate positivity and hope. These are perfect reminders that, whilst undeniably formulaic, Blake’s songs are thoroughly irresistible and rousing.

Raymond McGinley, very much the George Harrison of the band, continues to write the more translucent and enigmatic songs. Sometimes, he produces something that equals the infectious qualities of his colleagues (as with the triumphant Hold On here, with its lingering and insistent chorus) but, for the most part, his songs are harder to parse and encourage closer listening. I Was Beautiful When I Was Alive stretches out beautifully, incorporating a Neil Young-esque trudge and grand musical vistas. Steady State feels like a bucolic, gentle, wistful take on the psychedelia of Tomorrow Never Knows, with some highly effective brushed cymbals from Fran McDonald.

It’s arguably Love who proves the most imaginative and inspired on this album. If his Lightships side-project tended towards softer, lusher moods (sometimes to the point of haziness), his songs here are constructed with elegance and precision. Thin Air is brilliant and effervescent, with thoughtful chord changes and a memorable chorus. Even better are The First Sight and It’s A Sign, where the more elaborate arrangements occasionally threaten to overpower the band itself (in a good way). These are mini, unassuming explosions of joy. I Have Nothing More To Say is delicate and vulnerable, closer in spirit to the Lightships songs but elevated by a gently lilting melody and some varied textures in the guitar parts.

It feels very much as if Here follows a clear trajectory too, starting at its brightest before taking stranger or less predictable detours. This might result in relative excess (The First Sight, It’s A Sign) or alternatively in the band producing their slowest, most reflective songs (Blake’s closing ballad Connected To Life, about wanting someone who has withdrawn to connect once again). It is a well constructed, fulfilling work in its own right but what remains most impressive is how, despite never quite crossing over to major popularity, Teenage Fanclub are still able to exist in these challenging times. Still Here. As it transpires, that’s more than enough.