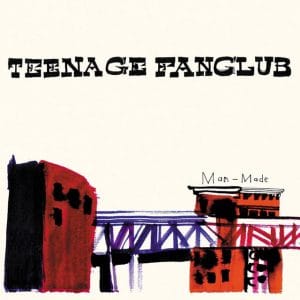 Teenage Fanclub has always enjoyed a much stronger following throughout Europe than in the US. This seems to be the curse of even the most talented, melodic, often-understated bands, that speak straight from the heart (see also: Fountains Of Wayne, prior to the accidental MTV hit Stacie’s Mom, as well as most everything ever done by The Posies). It’s sad, and I can only theorise about what that says about pop culture and rock music in America. But I digress.

Those still expecting the higher energy power-pop of Teenage Fanclub’s earlier releases will no doubt wonder – at first – where ‘the juice’ is on their latest release, Man-Made (Merge). While the band’s last regular studio album, Howdy, indeed probably was a bit too delicate, Man-Made clearly has staying power. Once given a chance, Man-Made shows itself to be totally absorbing in its own way, even if not to the degree of the band’s classics, Bandwagonesque and Grand Prix. By the ninth track, Fallen Leaves, it becomes apparent that the band has never lost that early energy – it has just evolved into something new and definitely fresh.

Album opener It’s All In My Mind reintroduces the band nicely. Slightly off-kilter and deceptively simple, the song is, like all Teenage Fanclub songs, driven by an excellent melody, complete with spot-on harmonies. The album gains momentum on track five with the gorgeous, up-tempo Slow Fade, before easing back into the almost somber, country-tinged Cell. Another standout is Born Under a Good Sign, sounding like a 2005 update of the British Invasion. Here the band shows that even without a lot of pyrotechnics, it can indeed still rock out a bit.

Since 1997’s Songs From Northern Britain, Teenage Fanclub’s – okay, the Fannies’, as their truest fans refer to them – albums have been all about finding a rather mellow, warm, and ridiculously enjoyable groove, and carrying it through from first track to last. With no filler and twelve excellent tracks, Man-Made is no exception. In fact, overall this may be the Fannies best album since 1995’s Grand Prix. The Fannies (how about just “The Fanclub” – it’s the same number of syllables?) continue their transformation from Big Star-inspired origins into The Byrds-meet-the-Beach Boys, with some Wondermints thrown in.

For those lacking a little patience, the increasingly more subtle approach of this band can be mistaken for a drop in quality. However, Man-Made makes it clear that the Fannies are still on top of their game, utterly relevant, and, in this reviewer’s opinion, are probably as good as any rock group of the last fifteen years.

While the fact that the Fannies are not on the radio all day, every day, may be confounding to many of us, it seems to make no difference to the Fannies, whatsoever. They simply continue to cruise along in their mellow, warm, and ridiculously enjoyable groove.