Teeth Of The Sea – Your Mercury 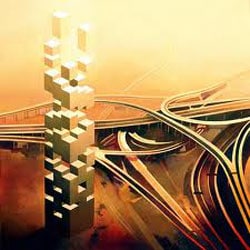 London based post-rockers Teeth Of The Sea return with Your Mercury being unleashed fairly hot on the heels of last year’s searingly intense debut Orphaned By The Ocean. Recorded at an ex-Costcutter/Goth Club/residence of Queen Victoria, it’s the Goth club setting that manages to seep into the record most. There is certainly some common ground with fellow Londoners The Horrors, a sense of gothic menace and grandeur that both bands strive for.

There are nods to ’60 psych rock and in the jittering spluttering synths that litter the record, ’70s prog. The 10 tracks seep into one another with a real sense of fluidity. This is an album that displays a fascination with sound, and from the deafening mechanical screeches of the opening Transfinite to the fuzz drenched squall of the swaggering Ambassador, this is one of the noisier releases of the year, although thanks to some very measured production dynamic range is never sacrificed for the sake of volume.

Cemetery Magus adds abrasive beats to the bubbling mass of sound and there are hints of Fuck Buttons in the serrated menace and ever present threat of violence. This is truly cinematic music; instrumental bands are prone to trot out guff about “wordless stories” but let yourself get sucked in here and a sense of narrative, a soundtrack to imagined images presents itself. This is particularly apparent on Midas Rex, which also displays the band’s tendency towards ludicrously wafty song titles.

Red Soil is the unabashed high point of the record, with a simple sample of the words “These people/these two people”, clipped and repeated like a vow. The band frame the words and build creeping solemn guitar around it and gives it the unmistakable air of a confession; maybe one that is too painful to share, having got this far. The influence of Godspeed You! Black Emperor is apparent and the track is unashamedly dramatic but manages to retain subtlety. This theatrical mass of unrecounted regret is suddenly halted by an ominous choir before a deluge of guitar squalls down. Masterful stuff.

The band only fall down when tracks become an exercise in atmospherics, such as on Horses With Hands or Mothlike, but these are still superior noise rock pieces and the variation, accomplishment and sheer virility of the record mean that, although coming late in the day, Your Mercury is one to rate with the better albums released this year.

Teeth Of The Sea MP3s or CDs

Teeth Of The Sea on Spotify