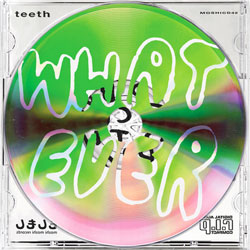 Time’s up. Have Teeth bitten off more they can chew? Are the East London trio all Barking and no bite? Is their debut album Whatever no killer, all fillings? It’s time to vote off the weakest pun…

Actually, Whatever is a fine debut album that should see them survive the pitiless music industry elimination game, and even shows signs that they could go all the way. They made a big splash with the tranny-tastic (and eerily familiar to anyone conversant with Von Südenfed‘s Fledermaus Can’t Get It) promo vid for Care Bear (see below), a fabulous slice of insanely catchy electronica. It’s also the moment where the record really hits its stride, after the slightly underwhelming salvo of Confusion and U R 1, the vocals on both tracks coming across just a little too cool for school.

But as the album develops, so does singer Veronica So’s contribution, taking in and spitting out Bis, Karen O, Sleater-Kinney and even a little Californian surf – See Spaces, with its yearning melodies, could be mistaken for a particularly ballsy Best Coast remix. The girl singer / guy wizard dynamic makes Crystal Castles comparisons inevitable, but ear-mangling distortion and demented shrieking are sensibly avoided. Instead, their power and impact is punchy, punky, and never self-indulgent.

Their secret weapon is the live drummer (whose name is not, but really should be, Molars Ulrich), who lifts the sound out of the clinical and into the primal, enveloping it in a thrilling wash of energy. Barnstorming instrumental album closer Street Jams comes in like a fuzzed up Standing In The Way Of Control, then explodes into a riotous, pounding fist-pumper like The Chemical Brothers at their most relentless. It’s the sound of a band outgrowing the Dalston squats, bars and warehouses they call home; a sound to fill tents and even fields – and quite why they didn’t give it a chorus is utterly mystifying.

It’s not a spectacular debut – if there’s one lesson they should have taken from Ethan Kath & co., it’s that you need a little light and shade to get your listener to the finish line happy. Instead, it gets just a little one-paced, and there are only so many squelchy, fuzzy bass synths you can hear before they start to melt into one. But it’s all presented with a verve and vigour that will keep them going a good few rounds yet.