by Tim Lee
published: 8 May 2016 in Album Reviews
Tweet 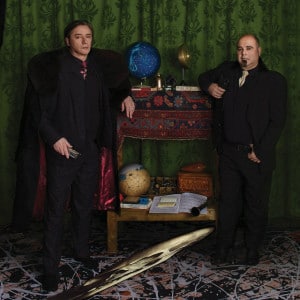 Nerissimo is the Italian superlative for black (ie. the blackest). So for the first and quite possibly the last time in the careers of Teho Teardo and Blixa Bargeld they’ve found their paths crossing with Spinal Tap. It’s like, how much more black could this be? And the answer is none. None more black.

It’s the second collaboration between Italian composer Teardo, most recently known for a his work on a series of film scores and Bargeld, sometime of Nick Cave & The Bad Seeds and Einstürzende Neubauten fame. And it is, undoubtedly, a black album, although not in the pit of Satan’s lair with added double bass drum assumed sense of the adjective. It’s a strangely warm and inviting blackness which greets you on Nerissimo. One which is infused with a certain sense of whimsy.

On the title track, which appears twice, opening and closing the album in English and Italian language versions, Bargeld delivers his lyrics with enormous relish, a slight smirk and the faint sense it’s all part of some elaborate joke that you’re not party to, while a series of subtle orchestral flourishes wheeze, creak and eventually peak in time for the chorus.

DHX 2 begins with bass clarinets parping and throbbing, before the whole thing morphs into an elegant lament, Bargeld mournfully suggesting that “hope should be a controlled substance”, while Ich Bin Dabei has hints of Björk’s Homogenic in the way it blends the very organic sweeps of strings with something digital and less human.

It’s lovely. Odd, but lovely. Which is Nerissimo in microcosm. It’s not odd for the sake of it, not wacky odd, but just a bit out there. For the most part, that’s fine. But the one moment which doesn’t work is the one moment where that weirdness goes a bit far.

Ulgae, a standard tale of romantic tale of daring do, where the protagonists just happen to be microscopic and living in a petri-dish. As a synopsis, it’s a bit like a new Netflix series dreamt up by a stressed executive a heartbeat away from allowing the words Monkey Tennis to tumble from their mouth. The execution, with Bargeld in full-on Jackanory mode and Teardo filling the background with the kind of noises which genuinely do sound like the heroic microscopic dwellers of a petri-dish, isn’t any better.

It’s the one point where the tinder dry sense of humour which runs consistently, if covertly, through Nerissimo bursts forth and attempt to tweak the noses of those listening. For the most part, like much of that which is going on here, it’s hidden and all more appealing because of it.

A definite case of still waters running deep, Nerissimo is a quiet work of craft by two musicians entirely happy to follow their own instincts. Like Spinal Tap.