by Matt Cotsell
published: 6 May 2021 in Album Reviews
Tweet 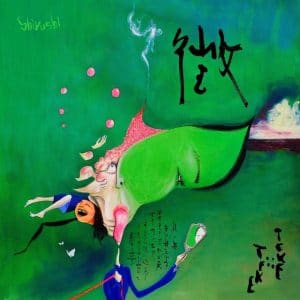 A queasy air of eccentric chaos and intuitive anarchy emanates from Shirushi, the temperamental album by Montreal-based surf rock septet TEKE::TEKE. Compounded by their impatient hopefulness, a succession of maze like melodies intermingle and loop together with reckless abandon.

Born as a tribute act to cult guitar hero Takeshi Terauchi, the precocious band have created a garish musical bric a brac, inspired in part by kintsugi, the ancient art of restoring broken pottery with gold and molten silver. And like those striking ceramics, it glints with new purpose and nods to the clumsiness of its makers.

If Deerhoof had rescored the Kill Bill films their efforts would no doubt sound much like the turbulent cacophony that features on Kala Kala, with vocalist Maya Kuroki’s wiry vocals theatrically dodging their way around the Tarantinoesque soundtrack. Mathematical drums sustain the increasingly discordant and bumpy track as it grows ever more unruly and grandiose in scope. Collapsing into a trumpet fuelled heap, it carries an air of contented slapstick. There’s traces of The B-52’s on the recent single Yoru Ni, if the Athens new wavers had found themselves dancing their messes around in a ’60s yakuza bar rather than the New York club scene.

The blotchy careering stops albeit temporarily on the languidly muffled Dobugawa, an existentially numbing ballad pulled from the old James Bond films, shot through with an absurdist Samuel Beckett streak as Kuroki unleashes her most intoxicating and twisted inner femme fatale. Flute riffs, ramshackle kick drums and feisty call and responses shoot the kinetic Barbara perilously into the stratosphere
before it lands with a dramatically satisfying bang. The band takes a relatively studious approach on Kizashi, its lunging carnivalesque components eliciting genuine curiosity from the listener.

Deploying ominous cinematic pacing and diaphanous harmonics, the transient Kaminari effectively incorporates an illustrative quality reminiscent of Cocteau Twins‘ Liz Frazer, before the Montreal musicians revert back into classic rockabilly mode and on the voyeuristic shuffle of Sarabande, they fixate on the more gonzo hallucinatory aspects of tropicalia and Turkish psych rock. Undulating flute and high-pressure trumpets accumulate on the cartoon like Meikyu, with Kuroki’s gestalt screaming exploding outwards. On the closer Tekagami, thoroughly exhausted and fragmented by their spiritual exertions, the group begins to sundown, in typically non-normative fashion. Thankfully being broken only reveals what makes them so unique in the first place, and as they begin to patch themselves back once again, their real beauty shines through.