by Philip Matusavage
published: 17 May 2013 in Album Reviews
Tweet 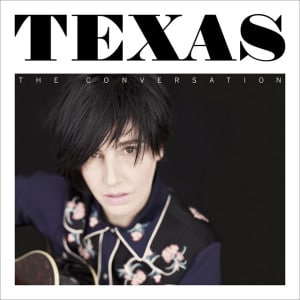 Everybody else is doing it, so why can’t Texas? While they never formally disbanded, the re-emergence of the Scottish band eight years after their previous album makes perfect sense in an era where ’90s nostalgia is big business. Indeed, given their late-’90s ubiquity Texas can claim a stronger emotional pull on this than most – their blockbuster albums White On Blonde and The Hush sold three million copies between them in the UK alone.

For those of a certain age, the silky smooth R&B of Say What You Want or the sun-kissed sheen of Summer Son will evoke days spent in an era where the radio was still the primary source of music and Texas strode across the medium like Goliath. More prosaically, they may bring to mind the slightly grubby shopping centres which they seemed to soundtrack around-the-clock for a while.

Undoubtedly brilliant at what they did, Texas’ middle-of-the-road pop meant that they were a band which it was easier to admire than to love and, while they undoubtedly wouldn’t wish to be seen as a nostalgia act, it’s a safe bet that they would want us to remember this period when they were inescapable and forget that their hiatus was largely forced upon them by indifference (by the time of 2005’s Red Book their commercial fortunes were in what seemed to be a terminal decline.) A briefly lucrative solo career for lead singer Sharleen Spiteri ensued – it would of course be uncharitable to wonder if this ‘reunion’ would have happened had her second solo album (the wretched The Movie Songbook) not bombed in 2010.

Still, Texas are no strangers to adversity – after their debut hit I Don’t Want A Lover it was almost 10 years until they achieved mass success again. That song’s earthy charm and slide guitar had been largely replaced by polished and programmed pop by 2005, so it’s something of a surprise to discover that the bulk of The Conversation is the result of a collaboration with Sheffield troubadour Richard Hawley (not so much of a surprise from his end though, given his work with artists as diverse as Shirley Bassey, Arctic Monkeys and Robbie Williams). It all makes sense with the lead single and title track which, with its twanging, swampy guitar hook, somehow manages to recall early Texas yet sound thoroughly modern. It’s a compelling pop song, as tight as stretched elastic. It and the insouciant ‘50s vibe of Dry Your Ears reveal that Spiteri and co haven’t lost their knack for melodies that lodge in your brain.

Both largely set the pace for an album which has Hawley’s love for the rock of the ‘50s and ‘60s writ large all over it. The smokey romance of I Will Always has a flavour of Blue Velvet to it, while the irresistible Big World has a melody which at times echoes Proud Mary. They sound little like what you would expect from Texas in 2013 yet Spiteri’s silky, evergreen voice and a tendency towards anthemic choruses mean they’re unmistakable as anything but. The gorgeous Hearts Are Made To Stray combines all these elements wonderfully, but at times the songs can’t escape the weight of their influences: both Be True and Maybe I suggest an alternate world where Spiteri followed up The Movie Songbook with an album of ‘50s cover versions. As anyone who’s heard that album would know, this is not a good thing. The album’s lyrics, meanwhile, are largely unexciting – as Spiteri sings over the lean guitar and dulcet feedback of Talk About Love: “Love, all you talk about is love.”

For the most part, however, this is an interesting and adept reinvention for a band who had previously seemed consigned to irrelevancy. It feels rawer than their past few albums, with only the glossy pop of Detroit City sounding like an obvious attempt to revive the radio anthems of their heyday. Its chugging guitars and soaring synths recall The Killers, but its self-conscious chorus isn’t quite up to the job demanded of it. If it seems unlikely that Texas will soundtrack shopping centres in 2013, then, this album is nonetheless an agreeable affair which restores the soul to a band that had lost its way in trying to maintain its enormous success. It may not rock your world but, against all the odds, The Conversation presents a Texas which you can imagine falling a little bit in love with.