The Antlers – Green To Gold 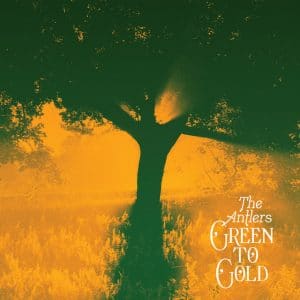 For a time during the second half of the last decade, there was a real possibility that The Antlers’ outstanding 2014 third album, Familiars, would also be their last.

Shortly after Familiars’ release, Peter Silberman, the lead singer and heartbeat of this quietly brilliant band, began to experience serious auditory problems affecting his left ear, a condition that left him struggling to cope with commonplace, everyday noises. Forced to abandon the frantic environs of his native Brooklyn, and therefore his bandmates, Silberman retreated to the quieter surroundings of upstate New York, close to where he spent his childhood.

Slowly, Silberman began to recover and his 2017 solo album, Impermanence, starkly chronicled the disorienting journey through the world of his temporary hearing loss and dislocation, which he feared might hamper his ability to ever make music again. He was then dealt a second blow when he was diagnosed with lesions on one of his vocal cords, requiring surgery for their removal and vocal therapy to retrain his voice to sing.

After such a traumatic few years, it’s a minor miracle that Silberman is now back in The Antlers fold and sounding as good as ever. What’s more, for a band who made their name playing epically sad, often emotionally traumatic songs, Green To Gold sounds positively sunny and mellow in comparison.

Each album by the Antlers has seen a subtle but perceptible evolution in style: from the introspective, sometimes almost unbearably intense Hospice to the more widescreen, anthemic Burst Apart and then the sprawling, woozy horn arrangements of Familiars. Green To Gold sounds simultaneously like all and none of them.

Most of the tracks on the album are built around the same core ingredients: mellifluous guitar lines, rolling piano, hypnotic rhythms and Silberman’s high, quivering voice, with occasional adornments including a flickering banjo on Just One Sec, a stately saxophone on It Is What It Is, and shimmering electronica on the slow building Volunteer, which is closest in feel to Hospice’s hymnal, otherworldly ambience.

The overall mood of Green To Gold is serene, with a sense of cautious optimism running through Silberman’s characteristically personal, sometimes raw lyrics. Whether it be the Wheels Come Home’s refrain “when your wheels roll home/no more you roam” or Solstice’s closing lines “We can see in the dark with our sunset sight/we delay the dusk, keepin’ bright, bright, bright”, there is a feeling of someone determined to enjoy life’s positives with the people close to him.

Best of all is the title track, which recalls the gently epic dynamics of Burst Apart in an elegant, poetic paean to the shifting seasons. With images like “seedlings turn to chutes and shoot up high/thunderclouds hold hostage summer sky/concrete’s hot with fire it can’t contain/we sit in front of fans and wait for rain” Silberman shows once again that he’s a lyricist of real stature.

If there’s a criticism of Green To Gold, then it would be the absence of any truly standout songs that scale the heights of Hospice’s devastating closer Epilogue, or its Burst Apart counterpart, the soaring Putting The Dog To Sleep. But it’s still a sumptuously crafted, warmly atmospheric and often beautiful work from The Antlers, proving that Silberman remains one of America’s most gifted, emotionally intelligent songwriters.