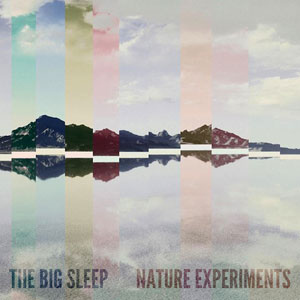 “I just want to write good songs,” was guitarist-vocalist Danny Barria’s wish for Nature Experiments, and on hearing the record it’s clear that’s precisely what he’s done. If their debut album Son Of The Tiger portrayed a band dropped somewhere between shoegaze and post-rock, and second album Sleep Forever was them discovering Black Sabbath, then Nature Experiments is The Big Sleep discovering pop.

This emergence of greater pop sensibilities is a logical progression from Sleep Forever. The band aren’t quite embracing pop in, say, the shameless way Kings Of Leon did when they released Only By The Night. Rather, this is an embrace of indie-rock melody that wasn’t in their work before. Take third track Valentine, an instantly accessible slice of pop-rock in the vein of Blood Red Shoes, for instance. And Ladders could quite easily slot in to a daytime radio playlist, being the lightest track the band has written – this being far from a bad thing. Yet at no point do they lose touch with the rich atmosphere that tends to shroud their music, creating a presence of extra sonic intensity that sets them apart from bog standard guitar bands.

Despite this new affection for melody and focus on writing more accessible tunes, they’ve by no means abandoned their heavier rock roots. Four Wishes is one of the best rock tracks to surface so far this year. Having more or less pinched the riff from Wake Up by Rage Against The Machine, they channel this through early Black Sabbath and psychedelic rock. The result is a near perfect rock song.

The rest of the album is an amalgamation of the heavier psychedelic approach infused with accessible melodies. Lead single Ace is equal parts brooding feedback, intricate guitar lines and shimmering vocals, all capped off with a rich instrumental outro. It highlights the band’s influences. The rhythms present on tracks such as opener #1 call to mind early Yeah Yeah Yeahs, while swathes of the album bear a striking resemblance to the most recent outing by Blood Red Shoes; although this is surely due to shared inspiration rather than them being a direct stimulus. The biggest credit to the band is that none of the tracks could be said to be shameless recycles of said influences.

Nature Experiments is an archetypal ‘grower’ album. With each listen one discovers that, despite the surface layer of accessibility, there’s great depth to the tracks. The Big Sleep have presented a collection of often excellent songs of real substance, making for an album that warrants, for the most part, unmitigated attention; preferably through some decent speakers. Nature Experiments is The Big Sleep crying out for attention. They deserve some.

The Big Sleep MP3s or CDs

The Big Sleep on Spotify