by Andrew Burgess
published: 17 May 2010 in Album Reviews
Tweet 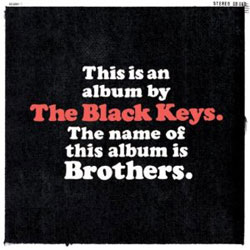 It’s hard to imagine that The Black Keys were ever lumped in with lesser members of the garage-blues revival way back in 2002. Never mind that they’re the natural, colour-coded antithesis of The White Stripes, or that they play guitar-and-drum blues. The Black Keys embody the toughest, oldest aspects of the blues and channel them through post-rock modernity without even a hint of sentimentality or nostalgic revivalism.

Consider the evidence: Jack White has taken extended hiatuses from the form to contribute to supergroups, write a James Bond theme, and appear alongside legends in a documentary. Meanwhile, The Black Keys (guitarist Dan Auerbach and drummer Pat Carney) have slugged it out, continually building on their sound. And now they’re back with Brothers, the best album yet in their already impressive catalogue.

After something of a separation throughout most of 2009 (during which Auerbach released his excellent solo debut Keep It Hid, and Carney debuted his side-project Drummer), the duo released the genre-bending hip-hop blues album, Blakroc, to lauded acclaim. “Dan and I grew up a lot as individuals and musicians prior to making this album,” Carney said of their workhorse year. “Our relationship was tested in many ways but at the end of the day, we’re brothers, and I think these songs reflect that.”

On the thumping gospel-funk tune Sinister Kid, Auerbach sings: “I got a tortured mind, and my blade is sharp; a bad combination in the dark.” The Black Keys tend toward those dark places, those swampy blues archetypes where women hit you “with a 10 cent pistol” because they “ruined her name” (10 Cent Pistol) and murder in the first degree seems the only option.

To capture that darkness, Auerbach and Carney did most of their recording at Muscle Shoals Sound Studio, whose past visitors include The Rolling Stones, Aretha Franklin, and Bob Dylan to name a few. “We like spooky sounds,” Auerbach has said of the process. “Like Alice Coltrane, where a dark groove is laid down. That’s the headspace we tried to get into for this record.”

The duo produced the album themselves, and a quick survey of their catalogue betrays that they’ve been carefully honing their sonic palette, not so much to a fine point as to a perfectly weighted blunt instrument. Danger Mouse (who produced 2008’s Attack And Release) produces one track, Tighten Up, whose whistling refrain sounds ripped from a Gnarls Barkley b-side, but still fits nicely in situ with the rest of the material.

There’s a palpable pall of spookiness over the entire record but, between Auerbach’s tin-can vocals and bass-heavy guitars, and Carney’s loping drums, there’s also a purity and strength of purpose that’s rare in so-called garage bands these days. Perhaps these are the very characteristics that have allowed the Keys out-blues their peers. Consider their upcoming supporting role at Kings Of Leon‘s Hyde Park show; even the Kings aren’t singing the blues anymore.

Brothers is a woozy, murky album, fat as a tick, and riled up like a kicked hornets’ nest. Whatever growing pains they’ve gone through as a pair has been worth it; Brothers hits harder than either of their solo albums. They’ve always stood an awkward head and shoulders above their peers, but this time round, they’ve emerged from their Akron woodshed armed to the teeth and hungry enough to fight for their place at the front of the pack.