by Chloe Johnson
published: 14 May 2021 in Album Reviews
Tweet 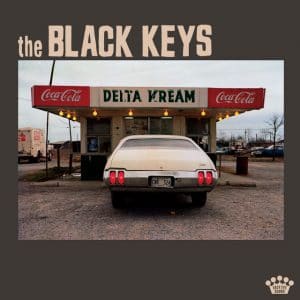 The Black Keys have always been oh so casual, and Delta Kream is the epitome of casual records. Balancing playfully between authenticity and laid-back, the duo of Dan Auerbach (guitar, vocals) and Patrick Carney (drums) creates a soundtrack for warm summer nights with not much to do, playing homage to Mississippi blues legends with this 10th album.

Referred to as “rock royalty”, this tracklist shows a slowing of pace by the band, taking a back seat from occupying their rock behemoth status and reflecting on this musical heritage that first gave them life.

Including blues canon works by the likes of Junior Kimbrough and RL Burnside, the vocals remain soft and uncharacteristically restrained; this mastery of the Country Hills style is effortlessly cool. Recorded impromptu with former RL Burnside guitarist Kenny Brown and bassist Eric Deaton, Brown’s guitar is the highlight of most of the tracks. Yet you can’t help but feel some parts of this record are missing the draw of the original renditions.

Occasionally, it seems this passion project balances on a knife-edge, with the instrumentation benefitting from the casual arrangement, but the vocals coming off jaded and distant from the singular take. Louise is one example of this, though Going Down South more than makes up for it with its multifaceted approach and zingy use of the organ.

Despite this, the pair’s love for the material is palpable, especially in the boisterous Coal Black Mattie, with Crawling Kingsnake a great instrumental opener (complete with rattling guitar) that sets the tone for this lax record. Poor Boy A Long Way From Home, however, will be the standout track you keep returning to.

Whilst Delta Kream is, without a doubt, a good album, and is sure to satisfy many a fan, it’s definitely more suited to those who are more interested in a low-key approach. Although very different to the explosive 2019 Let’s Rock, it still sets a great vibe. And while it’s not earth-shattering new stuff from the band, Delta Kream is still a pleasant offering to the blues scene. Even though it has some misfires, this album is still understatedly fun, driven by a pure zest for blues music that is impossible to shy away from.