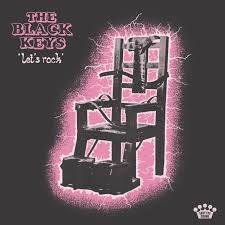 Old-style guitar rock is back in big business it seems. The Raconteurs’ comeback album Help Us Stranger (their first Number 1 in the Billboard charts) has been swiftly followed by The Black Keys’ first album for five years, the quote mark sporting ‘Let’s Rock’ – which does what it says on the tin. Jack White once notoriously accused the latter of ripping off the garage blues-rock of his own power duo The White Stripes, and even following them to Nashville – well, The Black Keys are hot on his heels again.

On ‘Let’s Rock’ the Ohio operation have gone back to basics, returning closer to the spirit of their early days. Singer/guitarist Dan Auerbach and drummer Patrick Carney started jamming together at the age of 16, then formed The Black Keys in 2001. After many years of building up a following with their raw bluesy rock, they crossed over to a more polished sound with their big commercial breakthrough, sixth album Brothers, in 2010. Follow-ups El Camino and Turn Blue were similarly successful, as their creators became Grammy Award-winning arena headliners.

Since then the pair have taken time out from The Black Keys, collaborating with other musicians, with Auerbach forming the side project The Arcs as well as releasing his second solo album. Now, together again, they have rekindled their roots in a homage to electric guitar.

‘Let’s Rock’ is the first album produced by the band without Danger Mouse since their fourth offering Magic Potion. It’s also the first Black Keys record to be released under Auerbach’s own label imprint Easy Eye Sound, recorded in the studio of the same name in Nashville. The album title itself has its origins in macabre humour. Auerbach read a newspaper article reporting that, on being asked if he had any last words before being electrocuted, a death-row prisoner in Tennessee simply said, “Let’s Rock”. Hence the quote marks around the title and the electric chair adorning the cover. And plenty of pulsating currents run through the tracks here.

It’s straightforward rock, minimalist and no frills in its execution. It’s definitely not a return to the raw, lo-fi sound of The Black Keys’ early basement recordings, but compared with their recent blockbuster albums it does have a rougher, more direct and spontaneous feel to it (all songs were completely written in the studio) – albeit with catchy hooks and big choruses. The 12 compact, musically muscular but lyrically lightweight tracks feature Auerbach and Carney doing their default thing very well, embellished only by occasional female backing vocals from Leisa Hans and Ashley Wilcoxson.

Opener Shine A Little Light has killer riffs and a soulful chorus, with Auerbach asking, “Have you ever tried to love someone who wasn’t even there?” in a song touching on mortality, bereavement and praying for enlightenment. Eagle Birds is a T Rex-style glam stomp about flying high together in love. Punchy lead single Lo/Hi focuses on the highs and lows of love and loneliness with raunchy guitar reminiscent of early ZZ Top (like several other songs on the album).

Walk Across The Water is a slower, softer-edged romantic song with some nice guitar licks and some corny lyrics: “Rivers run into the ocean / Oceans run into the blue… Then I walk across the water for you.” By contrast, the swampy Tell Me Lies, about a cheating lover, contains the embittered, rather misogynistic line, “Every woman who’s ever loved you is telling you lies”. Every Little Thing carries the warning “Every little thing that you do / Is always gonna come back to you”, backed by wonderfully distorted guitar-playing.

In the chirpy Get Yourself Together the singer promises “I’ll go wherever you go” amidst interweaving bluesy guitar lines. The mid-tempo chugger Sit Around And Miss You includes acoustic guitars in a song expressing the feeling of loss, whose main theme is strongly reminiscent of Stealers Wheel’s Stuck In The Middle With You. Go gives an irresistible sense of release with its infectious backbeat and stuttering guitar.

The ’70s AOR-influenced Breaking Down has a melancholic sentiment: “When your heart’s been aching / When you can’t escape it.” Under The Gun is another riff-heavy track with a driving beat: “On the road but I’m on the run.” And, finally, the percussive Fire Walk With Me climaxes with a scorching guitar solo – Auerbach may sing “I’m tired as I can be / Bruised, my weary soul” but the rousing music shows The Black Keys have plenty of rock’n’roll fire left in their bellies. ‘Let’s Rock’ certainly proves the electricity’s still there.