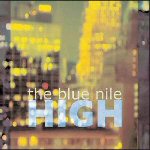 You certainly couldn’t accuse The Blue Nile of rushing things. Back in 1984, the Glaswegian trio released their debut album A Walk Across The Rooftops, a record of startling beauty. Only seven tracks long, each song was a gorgeous exercise in bittersweet melancholy. The follow up Hats came along five years later and was even better. In fact even today, Hats still stands out as a classic, one of those records that anyone with even a vague interest in music should own.

Then a long six years passed by before the band’s next opus, Peace At Last and now High, The Blue Nile’s fourth album in 20 years, is upon us. The amazing thing is that it sounds like Paul Buchanan and company have just picked up where they left off. The Blue Nile deal in slow ballads and Buchanan is a master at conjuring up all kinds of imagery in just a couple of lines. High is proof that they may have been away for a while, but they certainly haven’t lost their touch.

Each song on High glides along at a stately pace, with Buchanan’s world-weary vocals taking centre stage. Only She Saw The World raises above a mild trot, with most of the album being taking up with the ballads that The Blue Nile do so well. In fact, songs like Because Of Toledo, Soul Boy (covered by Melanie C last year, bizarrely enough) and the title track are amongst the best the band have ever recorded.

Buchanan’s lyrics are as well crafted as ever. Because Of Toledo tells the story of a girl who “leans on the jukebox… wearing a pair of old blue jeans”, which is simple but so effective. Opening track Days Of Our Lives describes a lonely housewife who “lives in a house in London… sitting around in her dressing gown” watching people through her window. It’s a sad, bleak tale but there’s compassion there too. The majestic title track is also memorable with Buchanan beseeching us to “look at the morning people going to work… fading away”.

Although some may call this album bland, that is to miss the point. The first single from the album, I Will Never, is a statement of undying devotion to a partner (“I have raised our precious child to be a man/But I will never turn my back on you”) that could have come off as sappy in other hands but works wonderfully here. Buchanan’s vocals are what raises most of the songs to another level – sometimes a gentle whisper, at other times an anguished cry, it’s one of the great, if less celebrated voices in modern music.

They may only appear at around the same frequency as Halley’s Comet but it’s records like High that remind you why The Blue Nile are so highly regarded. Like Lambchop or Talk Talk, they just do their own thing, unfettered by trends or marketing ploys. By the time the closing Stay Close fades away, you’ll be reaching for the calendar and marking off the days until the next release. Shame we’ll probably have to wait until around 2010.