The Body – I’ve Seen All I Need To See 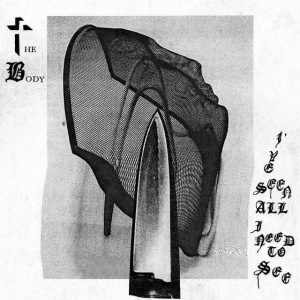 It’s almost impossible to hear, see or experience anything at the moment without a pandemic filter being placed like a shroud over critical faculties. Such is the wave of fear, division, and mistrust that it has become increasingly difficult for anyone to really know what on earth is going on and what is actually real. Remember when facts were a thing? Turns out that you need to research facts now for a good half a day to make sure they’re genuinely facts. The only thing that most of us can agree on is that things are starting to decay and fall apart at the seams.

The Body recorded I’ve Seen All I Need To See back in 2019, and yet, somehow they seem to have made an album that reflects and comments on the times we find ourselves in. Whether that means the world was just as fucked up back then as it is now is entirely possible, but this is a body of work that certainly resonates with a certain kind of clarity right now.

Not that clarity is exactly top of The Body’s list of sonic imperatives. I’ve Seen All I Need To See finds the Lee Buford and Chip King stepping away from the electronic sounds of their most recent work and exploring their earlier incarnation as a guitar and drums doom steamroller. That’s not to say there’s anything here that sounds like an archetypal guitar and drums duo. Thanks to the engineering skills of Seth Manchester, The Body have created a sound so thick, distorted and visceral that at times it is genuinely harrowing. The thunderous drums, shriek howls and waves of distorted guitar that pummel Eschatological Imperative into your brain are particularly effective. It might be one of the few moments where the duo are at full pelt, but it still feels as if it is coated in a coat of sludge several miles thick.

To begin at the beginning; the opening track A Lament begins with a reading of Douglas Dunn’s The Kaleidoscope, a poem that encapsulates the process of grief and a sense of growing hopelessness. The Body don’t seem to want waste any time in piling on the sense of doom, and from the off, the suffocating guitar tone comes crashing down. Dunn’s grieving husband hardly has his foot on the stairs he climbs a dozen times a day before The Body cover him in an ominous thrum.

As the song progresses there are moments where it drops out as if glitching or decaying, which adds to the intense feeling of doom and confusion. On first listen, A Lament make it feel as if your brain has missed an important piece of information, that something has been lost in in your memory or that something is being deliberately withheld. It is the sound of things falling apart and decaying. All of which seems very relevant at the moment.

Tied Up and Locked In follows, and surprisingly isn’t the latest strategy for tackling Covid (although it’s surely only a matter of time before being tied up is added to the lockdown rules). The band is at full tilt here, upping the pace, their sound being shredded and reconstructed as soon as it is made. Eschatological Imperative’s title and general tone hints at the end of humanity; and it’ll probably sound like this, doom laden and painful. They Are Coming piles on the sense of decay as the held guitar chords are throttled and fail in a static death throe. The Handle The Blade ups the pace a little with a skittering militaristic drum pattern, perhaps hinting at exactly who was coming in the previous song. Wrapping the album up is Path Of Failure, another title that takes on an uncanny significance in today’s world. Pounding drums, shrieked howls, cacophonous feedback and a truly ominous tone throughout leave no room for doubt, we have all taken a wrong turn somewhere, and the result is not going to be pretty.

I’ve Seen All I Need To See is a brutal album, of that there is no doubt. Somehow, there’s an odd clarity to be found amongst all the noise, distortion and decay. The Body might have looked to their past in finding the sound for this album, but in creating this slab of grief and anger, they’ve managed to be uncannily prescient. This is probably one of the most relevant and affecting albums of 2021, but let’s hope they’ve not been to accurate in their sonic predictions.

The Body MP3s or CDs

The Body on Spotify