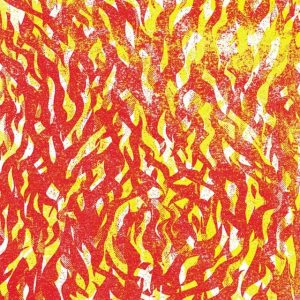 It’s as if he read this reviewer’s mind: seven years after his previous solo album was divided into a rather aimless, washed out ‘angels’ side and a thrilling, intense ‘devils’ side, The Bug is back with a record that’s all killer, no filler. Fire is packed with exhilarating performances by MCs like Manga Saint Hilare, Flowdan and Logan_olm, but the real star of the show is the earth-shattering bass.

Hear the flapping, distorted vibrations of War, the suitably explosive kicks on Bang or the monumental drop that comes halfway through Bomb. Kevin Richard Smith is no slouch at the other aspects of production, but it’s the bass that really makes the record feel dangerous – it’s dry and claustrophobic, it’s expansive and desolate, and at times it’s as apocalyptic as the Martians’ arrival in The War Of The Worlds.

There are plenty of lyrical highlights, whether it’s the pugilistic bars from FFSYTHO on How Bout That or Flowdan’s infamous yardie flow on Pressure (“wait for the revolution, but the revolution can’t start / we haffi go bloodclart start it”). Ganja Baby also provides a moment of respite with a surprisingly catchy hook, with only the frenetic snare rushes to separate it from a more conventional dancehall track.

Roger Robinson brings the record an overtly political dimension, with the intro spotlighting the international regression of civil liberties and bodily autonomy, while the closer places a Grenfell-inspired monologue over ambience crescendoing into a distorted dirge. At these points Fire feels like an inappropriate title, as for all its viscerality the mood can be as grey as the overcast skyline with a bleak, oppressive quality that makes the music of Burial seem naïve. A singular, striking piece of work from an artist on top form, this record is not to be missed.