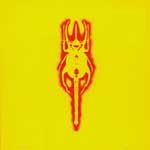 If one sound is going to dominate this year, it’ll be the booming noise coming from Jamaica’s dance halls, from house to hip-hop and beyond. Forward-thinking producers have been adding touches of ragga to liven up their tracks, and offering up a grimier take on the dance hall sound is The Bug’s Kevin Martin.

A self-confessed bass addict, Kevin has all the right credentials, as one half of Techno Animal, and the compiler of the excellent Macro Dub Infection albums, he’s been championing this sound for the best part of a decade.

Going under the name of The Bug since 2001, his dark electro-roots sound clashes have been championed by the likes of Andy Weatherall and the Aphex Twin. Snapped up by the Twin’s Rephlex Records, Pressure sees The Bug team up with a killer selection of MCs to act as verbal spars to his dirty bass-heavy bangers.

It starts with the militant call to arms of Politicians and Paedophiles with Daddy Freddy spitting rhymes over a pumping dance hall rhythm track, the drums coiled tight like springs, with a filthy bass line rumbling over the top. With apocalyptic intent, the album just gets heavier and heavier, as The Bug embarks on a mission of sonic war.

On Night Steppa The Bug comes across like Leftfield on crack, menacing stabs over a bouncing four-four beat and Roger Robinson chatting over top, it’s music that screams to be heard through a brutally loud sound system.

Not for the faint-hearted, but for anyone with an interest in dance hall styles, this is an essential album, brimming with menace. It points the way for the future of electronic music, as far from the stereotype white nerd in an anorak as it’s possible to get.

With the world seemingly teetering on the edge of cataclysmic disaster, The Bug provides a perfect soundtrack for our harassed paranoid times, tracks like Fuck Y-self and Killer fire off discordant sirens and screams over some of the heaviest rhythms you’ll hear this year, forever seeming to be on the edge of spiralling out of control, but somehow just holding itself together. This is the sound of now.