The Charlatans – Up At The Lake 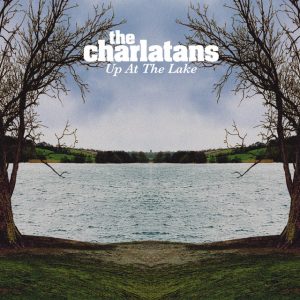 Nobody could accuse The Charlatans of taking it easy over the years. Since their inception, they’ve been hit with a swindling accountant, a jail sentence, cancer and even death in the case of keyboardist Rob Collins. Nobody would have blamed them had they decided to split years ago, but instead they’ve grown into one of the most consistently excellent bands around.

However, when lead singer Tim Burgess released his debut solo album I Believe last year, you’d have been forgiven for sounding the death knell for the North Country Boys. Instead, the band reconvened and retreated to a country cottage in Cornwall. The change of scenery appears to have done them a power of good – Up At The Lake is their best album since 1997’s Telling Stories.

Firstly, Burgess appears to have dumped the falsetto that he adopted for the band’s last album Wonderland, and retained for the solo project. Although the new approach worked on some tracks, over the course of an album it just proved irritating and it’s a relief to hear him return here to his previous style.

Also, the fresh Cornwall air has inspired the band to write some of the best songs yet. This is music rooted in classic rock, but a retro feel is avoided. Although there’s fun to be had in spotting the references (Up At The Lake borrows its opening line from Happy Mondays’ Loose Fit, and Watch You In Disbelief lifts its introduction from Heroes by David Bowie), the sheer exuberance of the band lifts the album above any accusations of karaoke rock.

This gives an uplifting vibe to the whole album – it’s the sort of record you can play in order to give yourself a guaranteed lift and to reassure yourself that everything’s all right with the world. The title track, Blue For You, and the Rolling Stones-alike Feel The Pressure are both songs that skate along wonderfully at a high tempo. The band haven’t lost their way with a ballad either – I’ll Sing A Hymn is heart-stoppingly beautiful and Dead Love finishes the album off well with some help from the Liverpool Philharmonic Orchestra.

In fact, it’s the second half of the album that really pushes The Charlatans up to a whole new level. High Up Your Tree has a gorgeously warm chorus that reaches out of the speakers and wraps its arms round the listener, while Try Again Today is another instant, optimistic Burgess classic. Loving You Is Easy, meanwhile, is the album’s standout track, a soulful ballad featuring Burgess and keyboard player Tony Rodgers sharing vocals.

Up At The Lake is another excellent addition to The Charlatan’s canon of work. Someone once remarked that nothing in life is certain apart from death and taxes. You can add great Charlatans albums to that list.