The Charlatans – Who We Touch 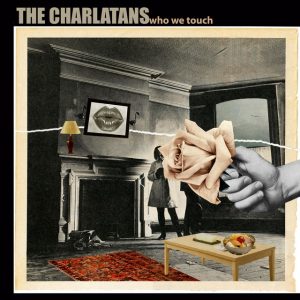 The Charlatans‘ 11th studio album, 20 years on from their classic debut Some Friendly (which they performed live earlier this year), reveals a band that has lost its way.

Although Who We Touch is a bit better than their hugely disappointing previous album You Cross My Path (2008), it still falls well short of their earlier output which made The Charlatans one of the top bands of the ’90s. A string of strong albums in which they reinvented their sound several times, from their original Madchester Hammond organ days to more rootsy Rolling Stones-like guitar rock, Bob Dylan-esque folk, soul and even reggae, showed the way to experiment without losing consistency. Now it seems they’ve finally run out of ideas.

The muscular single Love Is Ending is a misleading opener as it promises a harder-edged sound which never materialises. Beginning and ending with a thrash of metal and featuring Sex Pistols-style guitar chords, this punk rocker about a terminal relationship ripples with anger, but proves to be a one-off on an album which is more mellow than menacing.

With its softer, more conciliatory mood, My Foolish Pride is a Motown soul-tinged pop song with a catchy chorus and pizzicato strings, while YourPure Soul is downright self-condemning as the singer confesses “I’m tired of myself trying to control your pure soul”, amidst laid-back string- and organ-accompanied melodies.

The aggressive lyrics of Smash The System are echoed by the insistently hard drum beat, though what the singer is annoyed about is obscure as he moans, “I don’t belong here in your garden, I should be up there on your throne”. The repetitive, slightly funky beat of Intimacy drones on with front man Tim Burgess just about managing to stretch his voice from a low throatiness to soaring falsetto.

The excellent Sincerity is a bit of a return to The Charlatans’ earlier Hammond-driven style with a punchy, shouted out chorus, even though the tedious succession of rhymes with “sincerity” includes such ridiculous lines as “I find atrocity in your monotony”. However, Trust In Desire and When I Wonder are both instantly forgettable.

Oh! stands out from the other tracks on the album, with its moodily atmospheric circular guitar and electric piano motifs and an unexpected lurch near the end into Kurt Weill-like fairground music. Plus Burgess gives his most expressive vocal performance as he romantically warbles, “But we don’t know how to say goodbye/Sighing lightly underneath blue skies/But in my dream we are invincible”. But the Brian Eno-esque You Can Swim, with its ambient waves of distorted sound, washes over you so gently as to be soporific.

The ‘secret’ extra track I Sing The Body Eclectic features the singer from anarchist punk band Crass and performance poet Penny Rimbaud. Its spaced out music and lyrics are weirdly unsettling, as much to do with Rimbaud’s apocalyptic tones as the cryptic content of the words: “Oh, those magical moments of mind/Conjuring ideas of space/That we might wander as entities/Every bit as much disturbing as disturbed.” Sorry?

Though the band sound in reasonably good form and the album shows how much Burgess has developed as a singer over the years, overall the songs themselves are just not strong enough. The Charlatans don’t touch us this time.