The Charlatans – You Cross My Path

by Ben Hogwood
published: 12 May 2008 in Album Reviews
Tweet 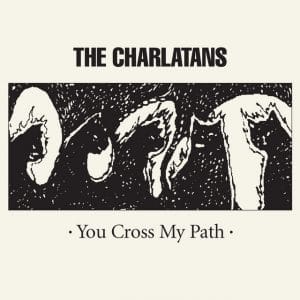 For any band, 10 albums is a pretty phenomenal achievement – still more if that band has had to go through bereavement along with its bewildering changes of label. You Cross My Path finds The Charlatans on label number five, going down the Radiohead route of making the music available for free download well in advance.

Over the course of their career Tim Burgess and chums have had several faces. North Country Boy found them gazing admiringly on the face of Bob Dylan, while who could forget when the singer went all falsetto on us in 2001, proclaiming Love Is The Key?

Well this time the focus of the band’s undimmed adoration is New Order, and it shows most vividly in the recent single Mis-takes. A barely concealed crossbreed of Blue Monday and World (The Price Of Love), it does nonetheless bear the unmistakable stamp of Burgess, who makes the song his own over an affirmative beat.

Still more surprising, perhaps, is the rabble rousing tune introduced as the wordless chorus for Oh! Vanity. Should the band play this at a Celtic festival in the near future, a warm reception is guaranteed – it’s the kind of rousing melody bagpipes were invented for. And this despite a less than convincing lyrical couplet that seems to say, “and now I’m growing up to be, a paranoid schizophrenie”.

These are easily the two most memorable tracks on the album, which isn’t to say the rest are all filler – they’re just not quite as memorable. That said, there is a keen yearning to be found in the spirit of BIRD, while My Name Is Despair, despite a slightly cheerier musical outlook than you might expect, is strangely affecting. Meanwhile This Is The End wraps up You Cross My Path on a staunchly offensive note, saying “this is the end, I’ll take you down with one reprise”.

So Tim Burgess still has attitude, the kind we saw on One To Another but one that doesn’t surface all that often in Charlatans songs. It caps an album that finds them frequently in fine form, if not always aspiring to previous heights. Ten albums on and the creative fires show no sign of dimming though – The Charlatans remain one of our most durable treasures.