The Chemical Brothers – Come With Us 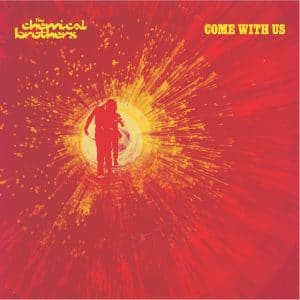 It Began In Afrika was a Top 10 smash single last year for The Chemical Brothers, back after an absence that seems longer than the year it was. Star Guitar, a summery piece favourably comparing with Basement Jaxx‘s Jus 1 Kiss, released shortly before this their fourth album, looks set to chalk up more success for Tom Rowlands and Ed Simons.

The pair met at Manchester University where they both studied medieval history, so the irony is not lost that Come With Us looks to the future as much as their chosen subject at university looked to the past. Only The Jaxx can hold a candle to these guys – and they don’t litter their work with quite so many references to… chemicals.

A decent number of collaborations lie scattered around the last three albums, with Tim Burgess, Beth Orton, Noel Gallagher, Bobbie Gillespie and Bernard Sumner being just a few of the names on the Chems’ impressive guest list.

They haven’t ceased that collaborating habit here, for The State We’re In is a lazy partnership with long-time associate Beth Orton (yes, the tall thin girl with the ginger hair wot plays folksy choons). But it is the final track of the album, The Test, which really blows the mind of anyone and everyone who has taken drugs then gone clubbing and taken some more. Richard Ashcroft is the guest vocalist this time, recording easily his most worthwhile track since The Verve split. From The Drugs Don’t Work to “Did I pass the acid test?”, Ashcroft’s integration into Chemical World is seamless.

Pioneer Skies sounds like it might have emerged from the heads of Afro Celt Sound System, full of electric bongo effects and a killer techno beat, were it not for the obvious Lucy In The Sky With Diamonds introductory phrase – albeit performed on distorted junkshop synths. Hoops features a fiddly guitar riff which *almost* apes (no pun intended) Blur‘s Music Is My Radar, while Denmark features a rude phat analogue sound over breakbeats and distorted vocals, producing a monster mutant of a dancefloor firelighter.

Ten tracks, each forming part of a perfectly formed foray into the future, featuring as many chemical culture kids as will join them on the… trip.