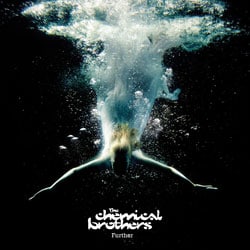 The Chemical Brothers have seen a lot during their 18-year existence. Having made dance music acceptable for indie kids in the mid-’90s alongside The Prodigy, Underworld, Orbital and Leftfield, they then spawned and outlived big beat and have since become one of the few dance music big guns to have survived and consistently released albums that leave many electronic upstarts trailing in their wake. Their last offering We Are The Night was one of Tom Rowlands and Ed Simons’ best to date. So what of their seventh album proper, Further?

Well, opener Snow is muted by the duo’s usual standards. Emerging from a sea of bleeps and washing machine-style drone, airy vocals and three simple chords then enter the mix. It means the album hits the ground walking but proves to be its single downtempo moment. The Chems have always done a fine line in euphoria but this time around there are many contenders for the accolade of ‘album goosebump raiser’.

First there’s the 12-minute soaring, grinding epic Escape Velocity which just builds and builds with a rumbling crescendo midway through that makes the track explode into life all over again. Another World switches between full-on, sky-punching peaks and fat, squelching, restrained troughs, lead-single Swoon has a Star Guitar-style Ibiza anthem quality to it, all gliding synths and sonic effervescence, and K+D+B trots along nicely with its soft and simple vocal sample and joyful electronic squeaks. Wonders Of The Deep is similarly shiny and happy. Yet while this is certainly The Chemical Brothers’ most blatantly positive album to date, the overall lack of a change in mood or emotion – after the beginning – is to its detriment.

While rousing psychedelia and melodic electronica take centre stage, thankfully there’s still room for the kind of dirty dancefloor beasts the duo are renowned for in the form of Horse Power. Horses neigh and whinny as nagging rhythms build into a repetitive headbanger that squeals and kicks and conjures up the atmosphere of a sweaty warehouse rave at 3am. It proves to be a standout amongst all of the nice yet singularly pitched tracks that surround it.

Having specialised in collaborations since their debut Exit Planet Dust in 1995, Further is surprisingly completely devoid of any big star names. Vocals are used at various points throughout the album but are used more as tools rather than creating the songs of yore such as Life Is Sweet, Setting Sun or Believe. The tracks on offer remain strong but overall lack the full character that a full vocal can bring and therefore lack a commercial edge (as Swoon reaching a lowly 100 on the singles chart may testify). This may well be a bonus for dance music purists but results in a lack of accessibility and immediacy for those who may turn to Tom and Ed as their token dance act.

While Further ironically does little to further The Chemical Brothers’ sound, they have once again produced a strong and sturdy album of high quality electronic music that still leaves many of their peers sounding one dimensional and unexciting. Tom and Ed’s ability to make machines both scream and sing continues unabated, even if some fans may be left craving more variety and obvious hit material.