The Chemical Brothers – No Geography 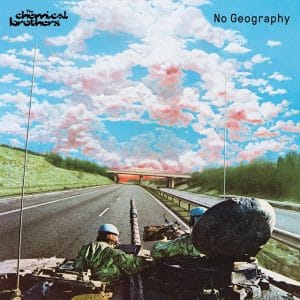 While we reel from the tragic and unexpected loss of The Prodigy’s Keith Flint, Tom Rowlands and Ed Simons find themselves more exposed as mature spokesmen of UK dance music. Yet it’s The Chemical Brothers who step up to the plate to provide an appropriate response to the events in their country’s recent political history. With discontent, protest and unbridled malice coursing through its veins, ninth album No Geography finds them rising to the challenge with even more bark and bite.

Brexit inevitably dominates the album, together with the negative connotations it has brought to the country. Yet there is an ultimately positive response from the ashes, reminding us of the place dance music has in culture as an antidote to all the shit. The two forces of energy are often fiercely juxtaposed. The onset of oblivion is impossible to ignore in Eve Of Destruction, with its twisted vocal, but it fires an irrepressible burst of automated energy. Then, on the title track, the vocal “If you ever change your mind about leaving it all behind, remember – no geography” is telling. “I’ll take you along with me” is the refreshing sound bite with which we leave.

Got To Keep On, with its heady sample of Peter Brown’s Dance With Me, is the polar opposite, an invitation to dance the night away in spite of cares and troubles. Its vocal ‘oohs’ are pure Balearic euphoria. AURORA brings excellent vocals to The Universe Sent Me and Bango. Meanwhile MAH, sampling El Coco’s I’m Mad As Hell, is the album’s killer heart, channelling anger for the crowded masses. “I’m mad as hell…I ain’t gonna take it no more” it barks, before cutting loose with serrated synths. The spirit here takes us right back to when The Prodigy were railing against the Criminal Justice bill in 1994. The stakes may be even higher this time around, but the first principles are the same.

Those principles extend to the Chemical Brothers’ studio equipment, for No Geography sees their return to the same analogue machines that powered Exit Planet Dust and Dig Your Own Hole. The bigger beats have a refreshingly human feel to them, and although Free Yourself brings visions of robots and AI superiority – especially in its video – the accompanying bluster is packed with brilliant human energy.

No Geography is a great Chemicals album, for it balances the hedonistic big numbers with sentiments of real substance, fighting its corner with vigour in the face of chaos. There is wit, too, amid the thrill of the high-powered riffs. There may be an unexpected down point with the resignation of Catch Me I’m Falling, but the lasting positivity of No Geography stays with its listener’s mind and body for a long time. It ranks as one of the Chemical Brothers’ finest achievements.