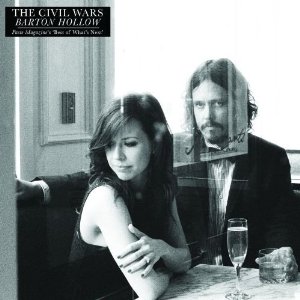 Although we Brits profess to love a good success story, there’s always a hint of cynicism when greeting the arrival of a disc that already carries a large amount of plaudits. Barton Hollow is one such success story with 300,000 copies sold in the US already (most of them independently – take that, Music Industry!) and two Grammy nominations to its name. Add the fact that the unstoppable force that is Adele counts herself as a vociferous fan and has booked them to support her on tour. When something is this successful, there’s got to be a catch, right?

No. One listen to this album will tell you that the hype is richly deserved. Joy Williams and her band partner John Paul White have created a disc of refreshing Southern gothic. The album’s songs of love, loss and longing are an immediate pleasure to listen to, displaying real restraint in a disc that it is pleasingly sparse and unembellished. The duo don’t try to overplay their strengths, and such deceptive simplicity is easy to warm to. The vocal duties are shared, and the styles complement each other well. Together they reach moments of spine-tingling and heartwarming synchronicity. The instrumentation is also laid back and the deftly played strings complement these intimate duets perfectly. The heavily atmospheric instrumental track The Violet Hour reminds of Nick Cave and Warren Ellis’ film scores. The title track is a vibrant piece of country blues that feels like it’s kidnapped the riff from Elbow’s Grounds For Divorce and held it hostage in the Wild West. Other highlights include My Father’s Father and the immediate stand out that is the heartbreaking Falling. And the final track on the album is a bonus track cover of Billie Jean – a track which side-steps any post-modern irony and delivers a sexy, raw and stripped down version of the song, becoming something that arguably complements the lyrics of Michael Jackson’s classic better than an ’80s disco beat. It’s impossible not to listen to a dozen times over on repeat. With Barton Hollow, Williams and White have delivered a great slice of Americana that will appeal to a broad cross-section of listeners. It’s a subtle collection of tracks that is surprisingly both intimate and ambitious at the same time. Although cynics may sneer at their comparatively overnight success, it’s hard to deny that sometimes these things are justified. Long may the war be waged.

The Civil Wars MP3s or CDs

The Civil Wars on Spotify


×
This site uses cookies to improve your experience. Read more.