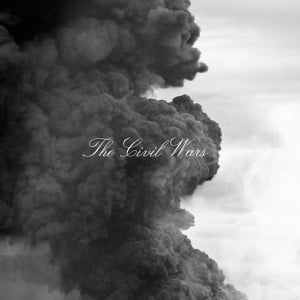 Rarely has an album been so appropriately titled, even if the decision to go down the rather unimaginative eponymous route might well have something to do with the fact that The Civil Wars have ceased to be a functioning band. Last November’s dramatic statement blaming the cancellation of their tour on “internal discord and irreconcilable differences of ambition” certainly added a previously-hidden edge to the duo of Joy Williams and John Paul White, who up to that point couldn’t have hoped for a better journey.

From the humble beginnings of a freely downloaded live album the band took in the soundtrack of Grey’s Anatomy, Jay Leno, a Top 10 debut album, a Grammy award and two features on the blockbuster The Hunger Games: Songs From District 12 And Beyond album – one of which was a collaboration with Taylor Swift, probably the biggest musical star on the planet right now. It reads like a dream come true. Yet the crash was swift and spectacular. Williams and White haven’t spoken since this album was completed in early 2013.

That neither party has ventured beyond nebulous responses in explaining this melodrama only adds to the mystique around this second album, which as a result will inevitably be forensically examined for ‘clues’. It’s difficult, of course, to read too much in this regard into the lyrics of a band who have always described their work as concerning “the good, the bad, and the ugly of relationships”. Nonetheless, opener The One That Got Away suggests at least that whomever sequenced the album knew all too well the reception which awaited it. It’s a suitably portentous introduction, its tone echoing the black smoke billowing into a clear sky depicted on the album’s artwork. The song cleverly inverts the clichés suggested by its title, finding the pair tremulously singing “I wish you were the one that got away” and declaring “I wish I’d never seen your face”. It’s impossible not to feed the album’s backstory into it, yet this only adds to, rather than creates, its compelling dynamism.

Indeed, for all of the lyrics which could be taken as references to their interpersonal breakdown, the first half of the record belies the chaos surrounding its creation with confidence and aplomb. I Had Me A Girl has a bluesy swagger that is far more forceful than anything found on their debut Barton Hollow, while the driving vocal interplay of Eavesdrop builds magnificently. The sweeping melody of Same Old Same Old and the infectious intimacy of Dust To Dust suggest, meanwhile, that the pair picked up some tips in how to craft radio-friendly anthems fizzing with emotional turmoil from aforementioned Taylor Swift. You can easily imagine them being performed by one of the folk duos who regularly pop up on a show like The Voice.

Things take an odd turn around the halfway point. The gothic Devil’s Backbone deploys a barrage of country-rock clichés but the anguished howl of Williams and White’s vocals manage to lift its ode to doomed romance above the mundane. It’s followed, however, by the jarring jangle of From This Valley, a song only briefly lifted from its MOR schlock by a gorgeous (but all-too-brief) a cappella middle section. The disjointed flow is typical of an idiosyncratic second half where the album loses its steam. The fact that White all but disappears for several of the songs raises suspicions that they were recorded once the duo could no longer bear to be in the same room.

Given this backdrop you would think, then, that a cover of Smashing Pumpkins’ classic dysfunctional anthem Disarm would make perfect sense. Instead, the slow and awkward arrangement drains the song of its simmering anger and dramatic tension, transforming it into what Disarm should never be – deathly dull. The mood never recovers – Sacred Heart aims for charming whimsy with its French lyrics and middle-eight waltz while the closing, demo-ish D’Arline goes for a warm authenticity but both only feel slight.

An album which begins by brilliantly capitalising on its history ultimately ends up exposing how it was derailed by it. The lasting sense left is of an unexplored potential which, if this is it for The Civil Wars, could be in its own messy way an appropriate swansong.

The Civil Wars MP3s or CDs

The Civil Wars on Spotify