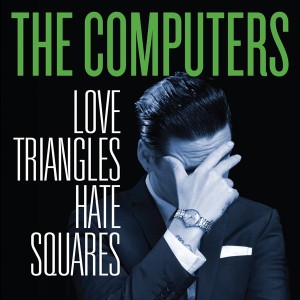 Hailing from Exeter, The Computers burst onto the scene as a Black Flag influenced hardcore punk band, with vocalist Alex Kershaw screaming and shouting his way through early material; the debut album This Is The Computers was released in 2011 and was subsequently dubbed ‘punk ‘n roll’, with the kick ass underlying punk riffs being the basis of their output.

Now, just two years on, the quintet make a substantial detour that will undoubtedly see them lose a number of early fans as they head towards a more mainstream, radio friendly sound. In addition to the new musical direction, the band are implementing additional incentives to buy their material which include limited edition coloured vinyl, personally signed albums and, most unusually of all, the ingenious Willy Wonka golden ticket approach where seven winners can claim a very special prize indeed – a live performance by the band in the winners’ very own homes.

Bring Me The Head Of A Hipster scratches the album into existence and then launches into a catchy rockabilly beat before succumbing to its all-too-soon conclusion. The title track is then given an additional 30 seconds, a bouncing bassline announcing its arrival before a drum roll kicks in and racing guitars and tambourines elevate the track to infectious levels as a ’50s rock ‘n roll vibe takes hold.

Mr Saturday Night continues the beat, throwing organ into the mix as Motown influences come into play, sharing occasional melodic similarities with the Smokey Robinson hit Tears Of A Clown and blending them into something resembling Dexys Midnight Runners. Nothing To Say keeps the vibe going with another catchy chorus and uplifting beat, underpinned by a Steve Winwood-esque organ.

Bubblegum pop evoking memories of Elvis Costello’s finer sing-along moments follows with the song title being spelt out as the lyrics ask “why are you so C-R-U-E-L” – another gloriously catchy number with potential airplay success. Lead single Disco Sucks contains a slight return to origins with its garage soul-rock feel, a punkier riff and the electric shock-like Hammond organ bursts that add another dimension to the song.

Marrying more ’50s piano rock ‘n’ roll with some Buddy Holly riffing, Sex Texts skips along to continue the overwhelming theme; Call On You possesses another fast foot tapping tempo, again driven along by piano mixed with some more of that Dexys-esque soul. Album closer Single Beds is another winner, completely breaking free of the constant high tempo pace to deliver a blues infected doo-wop delight with punk guitars and Würlitzer organ.

As the ever revolving wheel of influence spins to bring each individual ingredient to the fore, The Computers are not afraid to wear these influences unashamedly on their sleeves and in doing so have managed to produce a highly infectious piece of rock ‘n’ roll; despite the likelihood of some early fans turning away in disappointment, this bold move could possibly reap dividends and catapult the band into a wider consciousness as they grab everything of any substance from the ’50s, take a little Motown, some poppy Elvis Costello, some Dexys soul and mix it all together with their own punk roots to create something special that should bring a whole new army of followers both young and old.

The Computers MP3s or CDs

The Computers on Spotify