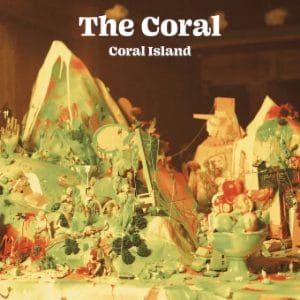 This year marks 20 years since The Coral released their debut single Shadow Falls. In that time they’ve transformed from a bunch of effervescent lads from The Wirral into, if not quite elder statesmen, veteran stalwarts, not to mention giving one of our best songwriters, Bill Ryder-Jones, his initial platform.

There’s a lot to take in on Coral Island, the band’s 10th record. It’s a sprawling concept album, set in a seaside town and divided into two very distinct halves. The first, Welcome To Coral Island, is sunny, breezy and wistful, while the second (The Ghost Of Coral Island) is a darker, more reflective affair which examines what happens when the tourists leave the resort.

The 24 tracks on Coral Island are sometimes linked by some short, spoken-word interludes, narrated by James and Ian Skelly’s 85-year-old grandfather. This all may sound unbearably twee but there’s a lovely familiarity to the album and, strangely for such a mammoth work, time seems to go by very quickly when listening to it.

The first half in particular is a delight, quickly pulling you into a world that you can easily imagine. Change Your Mind could be one of the best songs they’ve ever recorded, a gorgeously bittersweet stroll that recalls Teenage Fanclub‘s glory days, while the sunny Lover Undiscovered conjures up nostalgic feelings of first love and carefree times.

Even the more downbeat songs on the first half of the album, like Mist On The River, are coated in a romantic haze. My Best Friend is an ode to friendship, no matter how flawed that friendship may be or how many arguments you may have. Even a track like Autumn Has Come, which foreshadows the emptiness of the resort when the tourists leave, has a gorgeously carefree air to it.

Ghost Of Coral Island is darker, full of woozy fairground melodies (the sort that The Good The Bad & The Queen are so fond of) and there’s a few nods to the sea shanties which The Coral used to sing when Nathan Evans was just a toddler. Faceless Angel even tries to revive skiffle, with a surprising degree of success, with the haunting chorus of “faceless angels, where do they go” conjuring up images of desolate fairgrounds and solitary seagulls stalking an empty beach.

Unsurprisingly, given from the area of the country from which they hail, a big Beatles influence runs through the album like a huge stick of Blackpool rock. Summertime’s ‘ooh-la-la’ harmonies echo through the ages, while James Skelly sounds a dead-ringer for Paul McCartney on the closing acoustic track The Calico Girl.

Even the little spoken word interludes work beautifully, with the narrator building a world you can almost visualise. It’s a world obviously close to the band’s collective heart, with an accompanying book written by keyboardist Nick Powell fleshing out these characters further.

Coral Island is an ambitious record that never topples under the weight of that ambition. Unusually for a double album there’s barely any filler and the songs have a timeless quality that keeps you returning. At the end of their second decade, The Coral have released the best album of their career.