The Coral – Move Through The Dawn 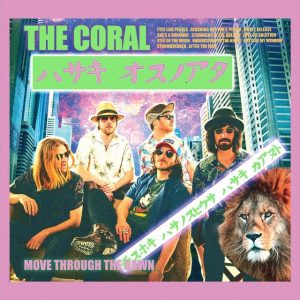 Though still in their 30s, The Coral are veterans of an indie scene that has changed out of all recognition since they started recording in the early noughties, with guitar bands going out of fashion. In fact, The Coral seemed to have run out of steam a while back.

But in 2016 the release of Distance Inbetween, their first new album for six years, was a real return to form. It revived the fuzzier, darker sound with which they made their name as a psychedelic folk-rock band – before they ‘straightened out’ the restless quirkiness of their music in favour of ‘pure’, classy pop songs.

Their ninth studio album, Move Through The Dawn, is as usual laden with sweet melodies – led by mellifluous singer and chief songwriter James Skelly, The Coral have always been natural tunesmiths. But, as with the well-crafted Butterfly House, the songs tend to be on the bland side so that you long for something to spice them up. Co-produced with Rich Turvey, this slightly over-polished album glides along serenely without grabbing you by the ears.

For the opener – and second single – Eyes Like Pearls, this makes sense. A seductive melody and lush string arrangements suit this song’s fantasy escape from harsh reality, as the singer starts by asking “What do you dream when the world is on fire?” and ends by confiding “Now my troubles seem so far away”. But Reaching Out For A Friend chugs along monotonously with a platitude on the importance of friendship.

Lead single Sweet Release is a bit more lively, opening surprisingly with a drum machine that leads into a motorik beat, and a positive declaration of “I’m in love with a new belief”. Probably the best track, She’s A Runaway, has a late-’60s West Coast hippy vibe, with its luscious vocal harmonies, lilting organ and infectious groove, in a story of a girl on the run from trouble at home: “Yes, she is free / No more pain, no more sorrow.”

Delving “behind the mask of our disguise”, Strangers In The Hollow has a pleasant enough tune without being compelling, while the confused feelings of Love Or Solution are led all the way through by an insistently chirpy drum beat in Merseybeat style. The haunting ambience of Eyes Of The Moon is reminiscent of early Coral, with a girl “dancing like a child in and out of dreams”, and mysterious moonlight features again in Undercover Of The Night, featuring hand-drumming and impassioned vocals from Skelly.

Outside My Window is the closest in feeling to songs from Distance Inbetween, with its air of menace, heavier riffs and jagged guitar-playing. And Stormbreaker also has a more muscular sound with its tale of a woman who is an irresistible force of nature – “She breaks the storm, the rain’s around her” – which ends with squalls of feedback. After The Fair is the calm after the storm, with its folksy acoustic guitars and Skelly singing wistfully, “I sing for the lovers lost in the rain” – quietly ending an album that leaves few ripples on its smooth surface.